Another week, and another set of controversies off field. Its getting too much to keep up with, and even as we wrote this, there is more alleged evidence on Essendon, and an alleged St Kilda drug testing "abnormal result".

As entirely amateur bloggers, we have to admit... We. Cannot. Keep. Up.
This news cycle is churning out so much on this... all correspondence on the issues via twitter.


THE RESULTS
In the preview to this weeks games we said there would be "No close ones this week. Not a cracker tipped to be under a three goal margin. Marketers dream."
And the weekend was just that, if you look at all the games and maybe exclude the close Port Adelaide v Brisbane game.

And we would have had that elusive 3rd burger (for a full weekend tipped) too... if it wasn't for those pesky kids at the Bulldogs...

North Melbourne's big win over Melbourne lift them back into our best ranked eight teams. Yep, they wont play finals, but they still hold a good enough record on our data to be inside the best 8. 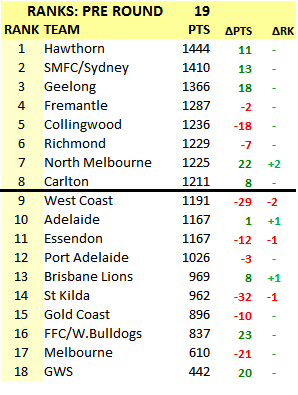 They also have had what we thought was the toughest draw of any of the teams (as posted here). This was echoed by Rohan Connolly's pre-season assessment (graphic in the same link, along with a link to the article). This was also the opinion of Troy Wheatley's blog.

So with a tough draw, and reasonable performances (yes... less wins than 2012), we still assess them as a reasonable team.

Worth also noting that our table has an effective mirror of the one at Troy's blog when looking at the three top teams and the rest. As Troy notes


"the top three have put some distance between themselves and the rest".

We also see such a gap, as this week the top three are now 79 points ahead of the pack, the second largest gap all season.

Dropping out of the top 8 was the Eagles, after being shot down by the Bulldogs. Easily their biggest points drop of the year, and the first time the Eagles are out of the top 8 all season (ranked as high as 4th before Round 8!).

The Dogs, from that game, collect a handy 23 point ranking rise, their biggest of the year, shading a +22 point rise after defeating the Lions in round 1.

Also of interest, Adelaide and Essendon change places, and are separated by only 0.2 points... closes margin recorded this year.

And finally, the Saints season on the slide continues, dropping now to 14th, after starting the season in 6th.
Posted by The FMI at 10:12