Two weeks ago, we ran the season results to date, and applied our rankings data to predict the remainder of the season.
The predicted number of wins and ladder positions based on that data is here.


After 2 more rounds, we have run the numbers again, and re-created the probable ladder finishing positions and predicted season wins as below.
It makes for interesting viewing, with


- teams like Hawthorn, Fremantle, Richmond and Collingwood all losing a game in the intervening two weeks, and


What we see also is a narrowing of the bands of expected finishes. With two more games banked already, there is two less games up for grabs for teams fighting for the eight.


Ladder Position:
As per the last blog post on this, we see the below as a probable finishing order.
The squares (club colours!) indicate the average finishing position that was determined, and the ends of the thinner lines the range of finishing positions. 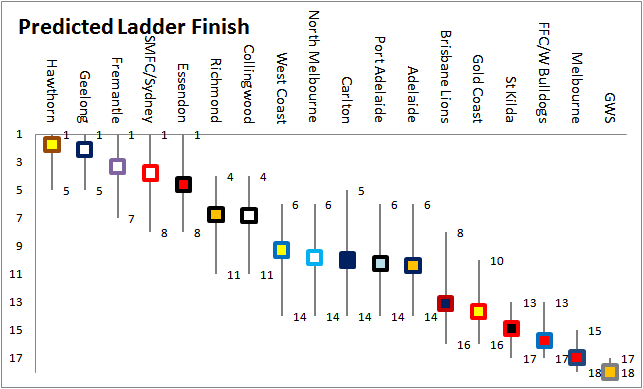 Hawthorn remain most likely to finish top, with Geelong a close second, and rising up from 4th. Those Cats wins over both Fremantle and Hawthorn showing some big value in our estimations on end of season finish. The remainder of the 8 stays as it was, but we note that the Collingwood and Richmond losses (to Port Adelaide and North Melbourne) has trimmed the 'best finishing' positions for both to 4th only.

The battle for 8th has really tightened since the last review, with now 5 teams in close proximity, West Coast, North, Carlton, Port and Adelaide. We would say, in our best Antony Green voice, that 8th place is "too close to call".

To make the above chart, the raw data below was used. This shows the percentage chance of finishing in ladder position.
To explain: you can see that we still calculate that Essendon can finish on top... its a 1% chance, but there it is. More realistically, they have a 40% chance of finishing 5th.

As per the chart above, the are clusters of teams calculated to finish in and around the same positions, as highlighted by the orange areas in the table below. 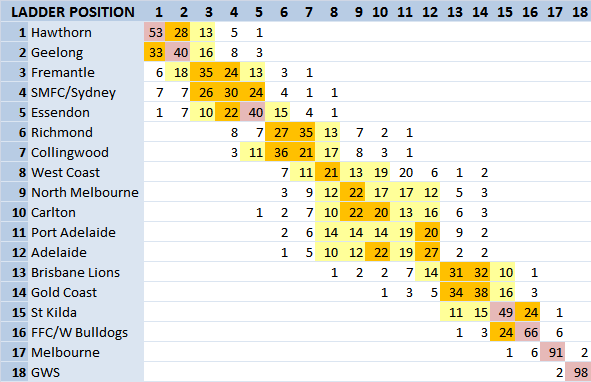 From the above, Hawthorn and Geelong appear locks for 1st and second, as does the St Kilda, Western Bulldogs, Melbourne and the GWS for positions 15 to 18.
Essendon seem to have a mortgage on 5th position (barring any AFL HQ injunction).

We still have those previously mentioned 5 teams clustered around 8th. It might be fair to say we are undervaluing Port Adelaide a little, and they could be the one to snag it.

The other measure is the number of wins in a season. Again using the same calculations we totaled up the wins and averaged them to arrange a ladder formation, as below. And we need to point out that to simplify the data, we have counted the Swans / Dockers draw in round as nominal 'wins' (and not moving into 1/2 wins and additional data points that brings).

And again we have a slightly different finishing order. 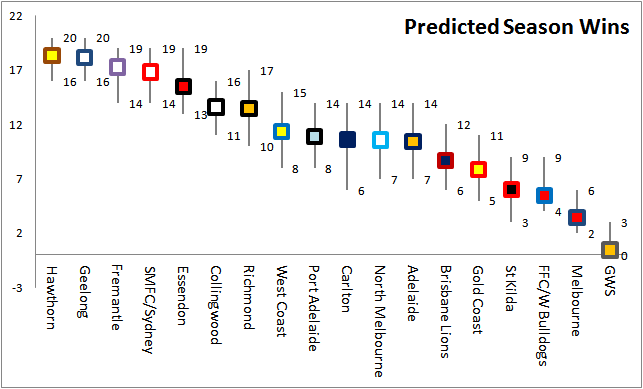 In this analysis, North are further down the list, with Port and Carlton moving up. Also, the bands are now narrower too. Again there are the same 5 teams basically level through positions 8 to 12.

At the top of the table, Hawthorn and Geelong can win 20 games, if results fall their way. And of the top 7 teams, Richmond have the widest window of wins. A 10 win season would see them miss out all together on the finals. This would be a 1 win from 8 games nightmare finish at Punt Rd.

The raw data is here, and follows the same formats as before. 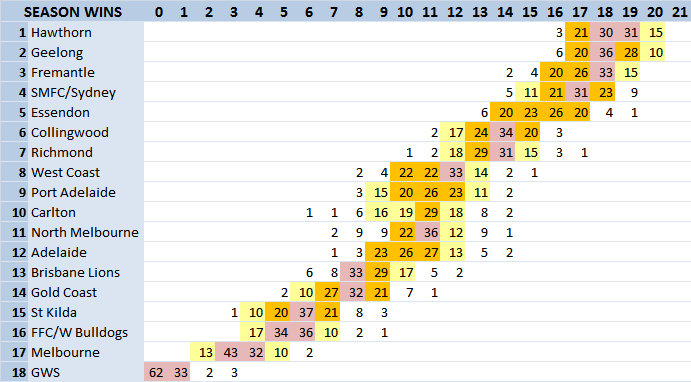 As we mentioned about Richmond and finishing with 10 wins...we calculate it is possible, but there is only a 1% chance of that season-collapse scenario happening.

Looking at the most likely number of wins (the dark pink shaded numbers), there are distinct gaps emerging.
Four teams are clustered around the 17-19 win bracket, then there is a 3 winning game gap back to Collingwood and Richmond with 14 wins (6th and 7th spots).

Another gap between those clubs and the teams bunching up for 8th spot as well, looking at 11-12 wins.