Another two weeks have rolled past, and here is the next season ending predictor from the FootyMaths Institute.
New readers should read the previous predictors from after round 13 and round 15 to help understand the numbers and charts.


Ladder Position:
With 2 more games in the bag, the predictor only needed to add another 6 more games to generate the chart below.
With this set of data, the step-wise nature of each of the club coloured squares in now more defined, but the variable positioning that each team can finish remains as a fairly broad spectrum for most teams.

What is also easily definable is the step-change in possible finishing positions between the teams Carlton through to Gold Coast, and the last four listed teams. There is now only 1 team in the initial bracket (Brisbane) that we expect to finish among the last four teams. And only the Western Bulldogs look likely to break out of the bottom four. 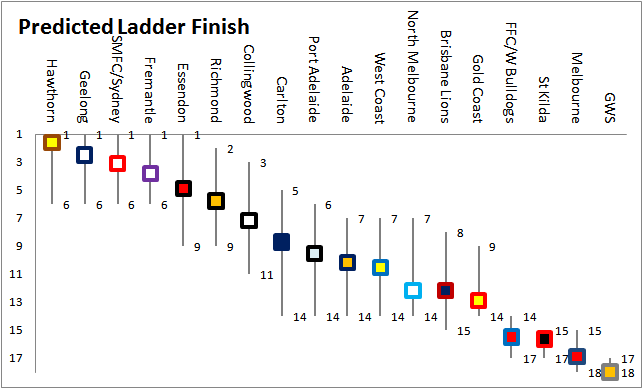 There is also a bit of a log-jam of teams around 12th to 14th, highlighted by the plateau in the chart above, and also in the orange cluster (% changes of 20-39) in the table below.

The table below shows the percentage likelihood of finishing in each position.
And as much as we expect Brisbane could finish 15th, and the Western Bulldogs to finish 14th, there is only a 1% chance of that happening. 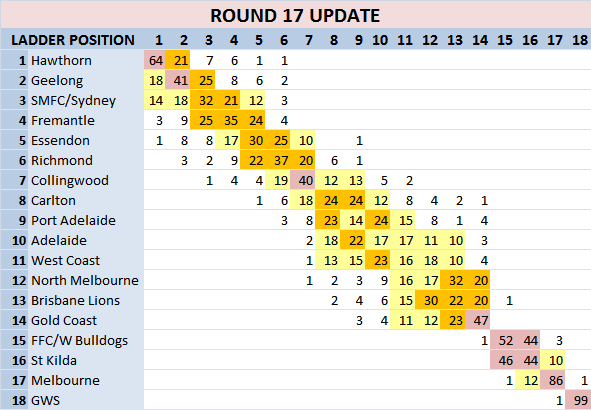 With all the gravitas that our best Antony Green impersonation can muster, we now safely call:
- GWS to finish last, with Melbourne in 17th.
- St Kilda and the Bulldogs will finish in 15th and 16th, though we won't call the exact location for each team just yet.
- With a calculated 64% chance, we call Hawthorn as Minor Premiers 2013.
- With only a 1% chance of not making the finals, we call Richmond and Essendon as 2013 finalists.

Those are the easy calls.
We also feel confident Collingwood will finish 7th and therefore be at the mercy of the AFL finals scheduling gods (which means as easy as possible for the nations biggest draw cards).
We also call the top 8 to be as above, though the actual 8th position team is still too close to call. We have nominally placed Carton in 8th, but we have 5 teams with a reasonable chance of finishing there.


Season Wins:
The expected number of 'season wins' chart has changed also, with the below also showing a clear break between the bottom 4 sides and the rest of the competition.

The other key part of this chart relative to the previous edition, is the finishing windows (the lines either side of the club colour markers) has tightened right up. This is expected as with only 6 games to go there is less variability. 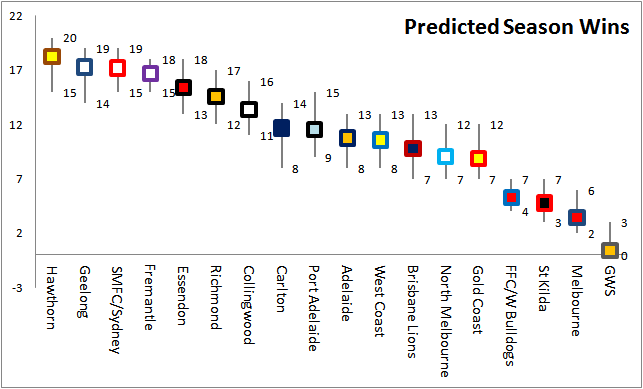 The data associated with this chart is more enlightening:
Previously, the Richmond window was quite large, but it has now, with two more games played, closed up to be 91% certain of 12 to 15 wins. 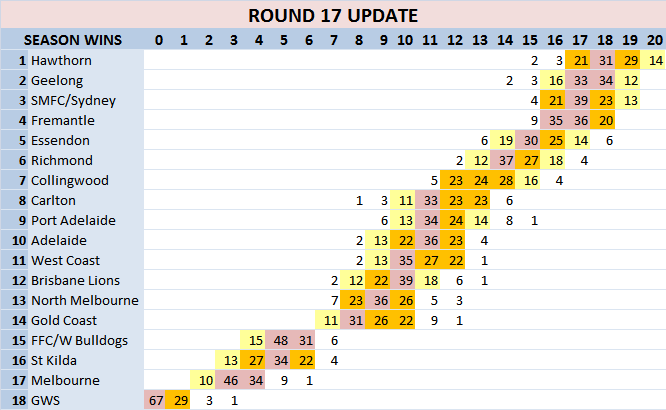 Also, there is still wide scope for Carton to finish with anything between 10 and 13 wins (90% chance), with Port Adelaide also in the same bracket (85% chance).

We also see the GWS as very likely to go the season winless (for the first time since Kevin Murray coached), and we have Melbourne a 90% chance of winning at least one more game of the year.

There are other clusters of teams winning similar amounts of games ( see 12th to 14th etc), so calling exact numbers in that scenario is still difficult.

We will revisit this after Round 19.

* Readers should also note a drawn game is counted as a win for ease of collating and sorting the data.
Posted by The FMI at 09:54