During radio interviews on Saturday 27 July, Andrew Demetriou had stated the AFL intend to release the Round 23 schedule this week. This backs up a tweet (that I cant find anymore) form the official @AFL account stating it will be released after Round 18.

In any past season, this would be a reasonably simple process, as the team match-up combinations are set in October the year before. The only trick is to fit in the games to suit the teams preparing for finals (e.g. no 5 day breaks etc).
This season, though, is a very different beast. More on that later.

If we look at the ladder post round 18 (at right), the following teams are in the frame as finalists, or potential finalists:

North remain a very outside chance too, but at this stage, all but eliminated.

Looking further at the draw for Round 23, we need to consider that the games played in round 22 games and the first week of finals impact the Round 23 draw.

We have had a rough go at scheduling Round 23 as below, left (with days breaks from the previous games next to each team, and non-finalists in italics). The Round 22 schedule is also below (right) for reference. 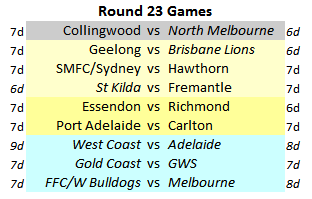 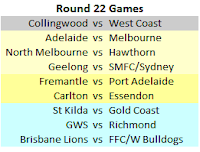 So, again looking back to the current ladder, we expect the  (hypothetical) Qualifying and Elimination

Finals to be played as here:

All this could change with the winds from the ASADA Report, and possible sanctions.


Finals Jigsaw With New Pieces
If, as widely expected, Essendon are sanctioned by the AFL and it includes loss of Premiership points, the Finals and the round 23 fixturing announcement is thrown into turmoil. (And thrown further int turmoil with the sabre rattling about injunctions and QC's at 20 paces that is happening now).

If we play out the scenario that out of the eight go Essendon, and in come Carlton (based on current ladder positions).
This doesn't make too much impact of the scheduling of Round 23, as before all games for the 8 clubs can fit into the Friday and Saturday time slots.
This is a huge positive for the AFL, and fans. The need to book flights and accommodation for players and travelling support wont be compromised by the extraction of Essendon from finals calculations.


What is does do though, is affect the dynamics of the first week of finals. A likely scenario is here.


Again, this is just one scenario based on the current ladder. There are many permutations that can occur.


Clarity going into finals is (usually) never fully achieved until the last round is complete.
With all that is swirling around Essendon and the AFL, a degree of clarity to the finalists would be helpful to fans and clubs alike.
What is important is to settle the whole Essendon issue quickly and promptly.
We await the ASADA report, and hope it does not become a legal shootout, where no one wins and decades of footballing tradition and goodwill are trashed.
Posted by The FMI at 22:55