While the whole Essendon / ASADA Affair has whirled about us, we have to wonder why Stephen Dank is silent.
If there is any reason or evidence that he has that clears his name, and the club, staff and players, then why not come forward?
There is also lots of Dank contradictions... he has a letter from ASADA, but no one can find it. He says Thymosin beta 4 was used, then retracts that and says it wasn't (see the link below).

So much said, so little documentary evidence, and no-one in the media tackling his 'truthiness'.

And Patrick Smith today in essence agrees... its time for the politics that Dank brings to the Affair to be debated.

No more nods and winks, it's time for wounded Dank to tell his story

THE sporting community and the media have indulged Stephen Dank long enough. It is time the sports scientist, at the heart of investigations in the two biggest football codes in the country, stated his case.

And not in selective interviews here and there. Not in door stops, not in coded conversations with journalists. Not opening the door of his car, the gate to his house. Time to front ASADA and tell the nation what actually happened at the football clubs where he has been employed.

If Dank would make himself available to ASADA investigators, he could clear his name and repair his reputation that he believes has been shredded since the ACC released the findings of its investigation into the use and distribution of banned performance-enhancing drugs in Australian sport.

Dank continues to trumpet his innocence, says he has all the documentation required to back up his words, so he has nothing to fear. Rather, he can re-establish himself as the pre-eminent scientist in performance management. ASADA awaits him.


ASADA does indeed await him... and so does the football community. But are there any football journalists who will really ask proper probing questions while we wait?
Or is it all about keeping 56,000 members "feelin' good"?

Back to this weeks tips and the results.


THE RESULTS:
A less than reasonable return, with 6 from 9. As we tip by the formula, there are chances where we undervalue (and overvalue) teams, and while we did suggest from the Mezzoculo Index that the Bulldogs could win over Carlton, we still missed on Collingwood and the West Coast. And we cant even blame any errors in home ground advantage,a s the discrepancies in those results are huge.

The weekend at least started and finished well with close margin tipping.
We were off by 3 points on the Hawthorn margin,and also were 5 points off on the Adelaide v North Melbourne game ... not too bad a result. 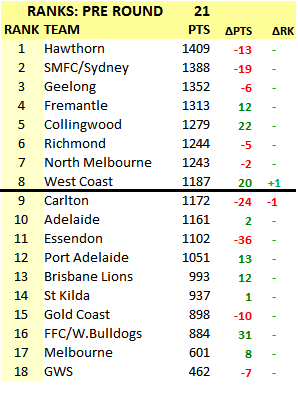 Looking at the table, we can see only one change. West Coast return to the top 8 at the expense of Carlton.

The top clubs, and Hawthorn in particular, continue to return to the pack. The Hawks now closest to 1400 ranking points for the year.

Sydney could have taken top rank, but the failure against Collingwood sees them miss that chance.

All of Essendon's good work earlier in the season is evaporating, mirroring their season unraveling in real life.

The Bulldogs are beginning to turn around their season and are looking promising. Not the 'sad list' that some suggested they had. And certainly not worthy of media criticism (or flying under the radar) either... as we suggested earlier in the year.
To be revisited, we think.
Posted by The FMI at 08:10