Another pre-amble on Essendon... hit page-down a few times if you want the tip results.


We initially wrote a blog piece about 'The Victorian Disease', as we had seen on social media the various campaigns by ordinary supporters that seemed well intention-ed (no doubt) but also somewhat fanciful (that a social media campaign could affect an outcome). It was further spurred by the Essendonian ramblings of Robert Gottleibsen (here and here). An extremely well thought of and obviously educated man who appears to have been lead by the heart in this matter.

Just a few days after we blogged on 'The Victorian Disease'... that virulent infection that seeps into the mindset of some of the Footballing Community in the home of footy... comes another public example of it.

A piece in The Age by Bruce Guthrie beautifully illustrates how 'The Victorian Disease' easily affects even the most knowledgeable of men.

Of immediate alarm to us was the questioning of the findings of the Switkowski Report,

Ziggy might be a well-respected businessman with particular skills in running a telco, but I’m not sure he has any expertise as an investigator. A court might not be too impressed with that document either.

Now, our immediate response to this (as we tweeted on Sunday morning) was...

- Are some of the Bomber factions now turning on their own internal, independent report?

- Is it a case of 'If you dont like the findings, burn the report and discredit the messenger'?

- Will only a 'we did nothing wrong' finding fully placate some of the Bomber factionalistas?

- If as Mr Guthrie contends, Dr Ziggy Switkowski is not an investigation lead with the right expertise, why did your club hire him?

- Or by suggesting Dr Switkowski was not appropriate for the investigation, were you in turn suggesting the club chose poorly? For a club to be accused of 'poor governance', as Essendon are, then suggesting further poor governance is not helping your cause.

And all of those questions from only two lines in the Guthrie column.
We should also note that Dr Switkowski was also assisted by Dr. Andrew Garnham, Specialist Sports and Exercise Physician and Clinical Senior Lecturer at the School of Exercise and Nutrition Science, and Medicine, Faculty of Health, Deakin University.
Which is, to understate, a pretty decent set of heads to investigate the situation.

And one final comment... on the call for haste in reporting by Mr Guthrie.

You need an exit strategy real quick, or this thing is going to drag you and the game down to a level none of us wants to contemplate.

The notion of finishing the investigation quickly is interesting, as it also leads to problems later. Rushing investigation never leads to proper outcomes. Due process and the search for truth (that most Essendon press releases mention) are never restricted by time constraints. This may well drag on, and the best way to stop that is to come clean, surrender all relevant details, and allow the due diligence of this investigation to come to completion.
Oh, those words again... 'due diligence'... something it appears was NOT DONE at the time Essendon went down this path.

And I suspect that may be the motivation of Mr Guthrie and his "lawyer friends"... to come to incomplete conclusions, hastily arrived at, ram them down the throat of the overwhelming majority of the football community, and then let Essendon go on about their merry business as if nothing had happened.

And that wont happen.

For further reading on the Guthrie column, please read this by Erdem Koç, a lecturer in journalism at La Trobe University.

The dangers of red-and-black coloured glasses

Yes, the game will be hurt. It could have serious ramifications for the club, its fan base, its sponsors, and the health and wellbeing of those at the centre of the investigation. We’ve already seen the personal toll it has taken.

But what’s the alternative?

Sports that have failed to deal with anti-doping behaviour and dodgy practices – such as international cycling and baseball in the US – have caused damage to themselves which are almost irrevocable. This cannot be allowed to happen here.

The Guthrie piece is another example of where intelligent individuals can miss seeing the reality when blinded by faith and love for the club... the 'Victorian Disease'.

THE RESULTS:
Seven correct  from the nine games this weekend, missing the Bulldogs and Carlton.
Pretty happy to have got the a few close margins too.

An almost exact tip on Sydney, and a missed margin call by 1 goal on the Brisbane game... a reasonable effort. 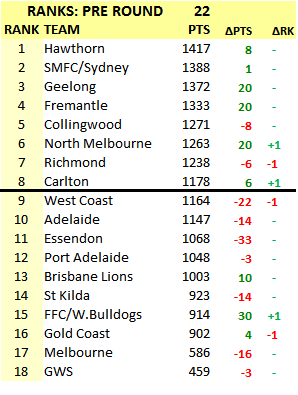 The table sees three changes...
North Melbourne move over Richmond after their big win over Essendon, and the Tigers failure against Carlton. North's move up is also following the trend set by the Troy Wheatley rankings.

That Carlton win brings them back in to the eight, at the expense of West Coast who got humbled on their own patch. Subiaco is a nightmare venue for the Eagles this season, 3 wins and 7 losses.

The Bulldogs continue with their fun run (As we mentioned last week) and rise up to 15th and into the 900 point bracket.

Also worth mentioning...
- Brisbane also leap into the 1000 point bracket,
- the Gold Coast nudge gently into the 900 point bracket, and
- There has never been a bigger gap between 16th and 17th all season. Melbourne and the GWS are adrift, at least 317 points away from the rest of the AFL.
Posted by The FMI at 12:57