This weeks tips proudly brought to you by your local compounding pharmacist. 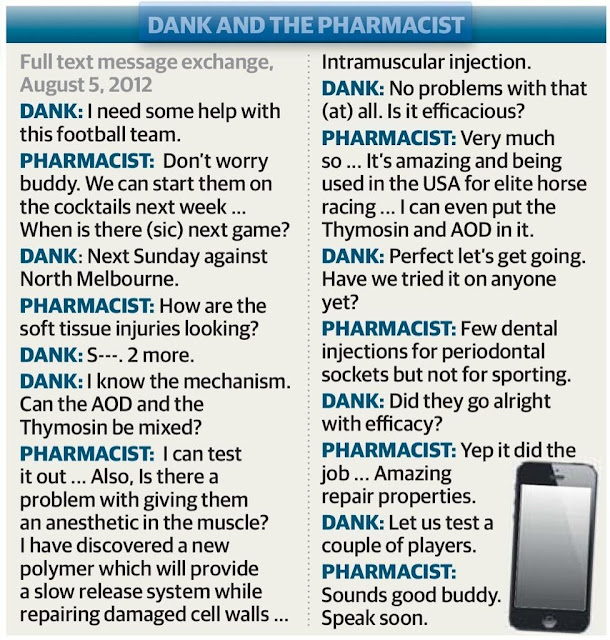 Note of course, the date of the correspondence (5 August 2012) and that the club in question will play North Melbourne next.
The 2 more soft tissue injuries is interesting... seemingly there was one after the Adelaide game, but there were two more from the previous week.

With the above text discussion between Mr Dank and the pharmacist, and the interview with Mr Dank and The Age's Nick McKenzie, and the admission by the Captain, its looking like a compelling case.

Which brings us back to Dave Culbert's question.

THE TIPS:
Last week of the home and away season, and we have the two close games on offer.

Carlton to defeat Port Adelaide by 1 point to score the last spot in the finals, and Collingwood to win by 2 points over North Melbourne.

Blow-out wise, there is a good chance Geelong at home could have a party against the Lions, and we even tip the Gold Coast to go close to scoring their second blow-out win.


Tipping Upsets:
Adelaide might sneak past West Coast, who are in a form trough now.

Scaping Goats:
North Melbourne are showing better form that the Pies, and the closeness of the tip means that this game could go either way.
Port are shading Carlton in recent form, so that game could be a win for Port... and the close margin tippied confirms that.
Posted by The FMI at 13:05