For the final time this year, lets chart the ladder course again.
With another two rounds done and dusted, the scene has changed again
Previous editions after rounds 13, 15, 17 and 19 are all available… click on those numbers to access each one.

In this edition, the numbers are again significantly more defined after

Ladder Position:
The chart below is our latest iterations of where teams will finish, using results up to round 21 and predicting (based on our rankings data) the remaining 2 matches. 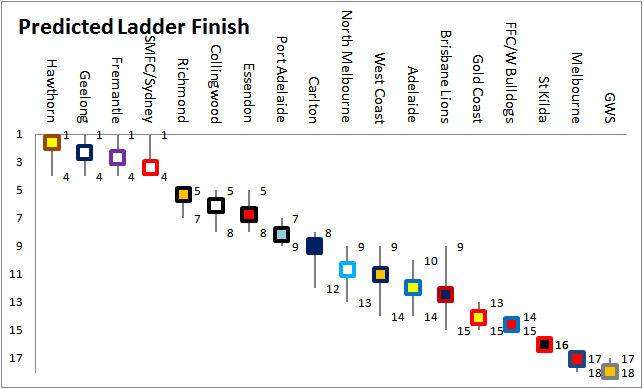 Looking at this chart, we can see a few obvious things.


- There are now only four teams with chances of finishing top, and these four will be the top 4.
- Richmond and Essendon have lost chances for a top finish 4th, but the Tigers are still more likely to finish 5th.
- Port Adelaide hold as our preferred 8th placed team.
- Losses to North Melbourne and West Coast mean they cant finish 8th, but could finish 9th, with Brisbane in the mix too!
- The bottom FIVE teams are most likely not to change. The Suns joining this group.


The only positions we see in dispute are 2nd and 3rd (Fremantle / Geelong) and 14th and 15th (Bulldogs / Suns). We think most other positions are settled.


Looking a the data set that created this chart highlights the comments above about positions.
(NOTE: Bold text to highlight the current ladder position, so you can get some idea of possible changes)


- The top 4 now is the top 4... and more likely that Fremantle could finish 2nd than Geelong.
- We have Richmond up from 60% chance of finishing 5th to 76% chance, and it is not unrealistic they could win both their remaining matches (v GWS, Ess) .
- Essendon and Collingwood are not likely to move either (Ess: v Carl, Rich / Coll: v WCE, NM).
- Port Adelaide move to an over 50% chance for 8th, though Carlton's win over Richmond keeps them well and truly in the hunt.
- A block of clubs have reasonable chances for 10th through to 13th.
- Of those, North (11%) West Coast (6%) and Brisbane (1%) have a 9th position chance.
- We also have St Kilda to finish only in 16th, and slim 5% chances for GWS and Melbourne to trade places. 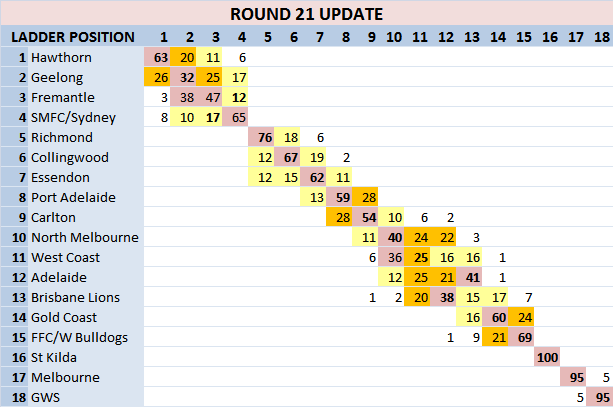 Antony-Green style position ‘calls’:
We call the bottom 5 to remain as is:
14. Gold Coast   15. Bulldogs   16. St Kilda   17. Melbourne   18. GWS.
We maintain that Hawthorn will be the minor premiers, despite predicted outcome to have dropped from 65% to 45%.
We call Port Adelaide, up from a 46% chance of finishing 8th 59% as a finalist.
Calling Sydney in 4th, Carlton in 9th.
Last weeks big call… We call 5th place for Richmond looking good.

Season Wins:
With just 2 more games to go, the variability of data has narrowing down greatly again, as the chart shows.
NOTE ALSO that any drawn games have been counted as a ‘win’ for ease of collating and sorting the data. This inflates the Fremantle and Sydney data and positioning. A more realistic number would be Freo and Syd: 15.5 - 17.5 wins. 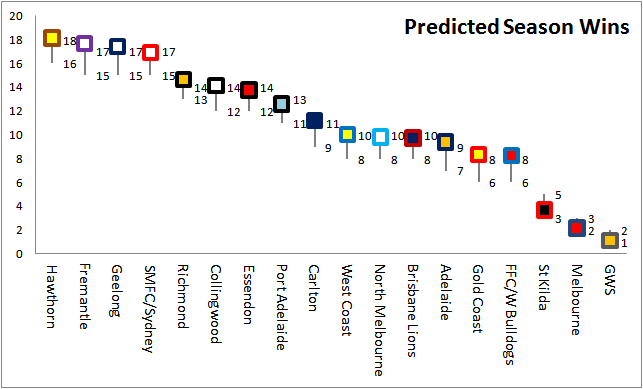 The data to make the above is here (below), and again we have added the bold text to indicate the number of wins now. The ‘zero’ marks below are added to show teams current number of wins and we expect them to win another game at minimum. 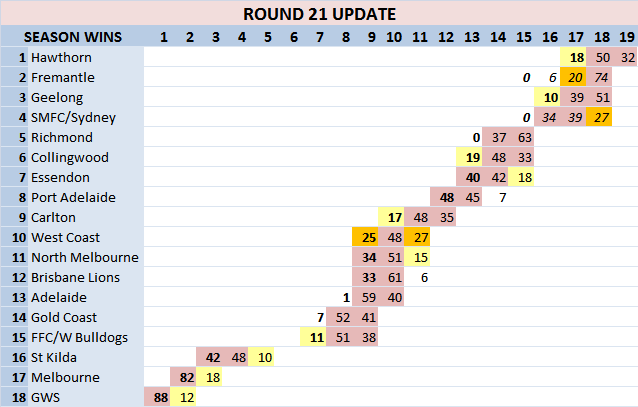 The Fremantle data suggest a two more wins from the next two (Port, St K).

We dont expect Sydney to win any more (Geel, Haw), but Geelong and Richmond are also expected to win at least one, if not two more games. (Geel: v Syd, Bris / Rich: v GWS, Ess)

Collingwood are also likely to win one more from WCE or NM, where as Essendon look to go winless.

The Gold Coast and Adelaide are montys to win at least one each as well, and possibly both.  (Suns: v St K, GWS / Adel: v Melb, WCE)

Saints lead GWS and Melbourne in being adrift at the foot of the table, at least 2 wins away from their nearest rivals.
Posted by The FMI at 12:28