Back in June, we blogged about the Bulldogs, and how some in the media were suggesting that they were missing the critical glare of the media due to the Demon turmoil at the time. The were even described as having one of the saddest playing lists in the AFL.

Our analysis at the time (up to round 10), suggested otherwise. They did have a poor win/loss ratio, but we at least had then performing to a level consistent with our ranking of them, and maintaining a standard. 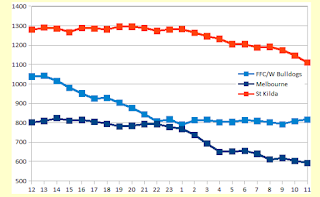 We also compared them to Melbourne (who were in crisis-mode then), and also to the Saints.

The analysis (at right) showed the Saints were on the slide, and we thought perhaps the media spotlight should be shone on Seaford, not West Footscray.


Another 10 rounds later, and our rankings data suggests that the Western Bulldogs are indeed bobbing up for some media attention... but not the critical type, the glowing type.


We have run another chart (below) that highlights that the Bulldogs have maintained a steady ranking during the year, and are now starting to show genuine signs of improvement. The last 5 weeks netted them an almost 100 point improvement. 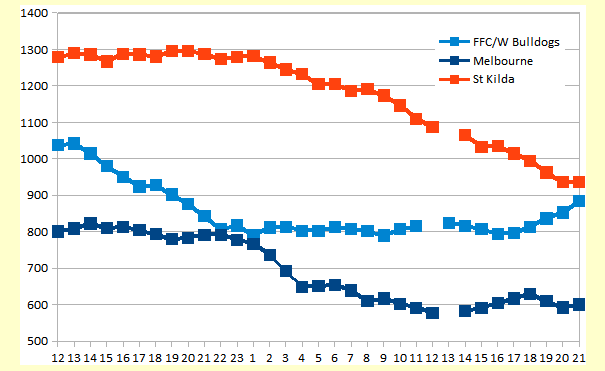 The chart also shows the Demons stabilizing their position, as poor as it is, and the continued slide of the Saints. For St Kilda fans, the chart above shows almost constant decline for the entire season

So, while the media might have gone hard on the Doggies as per this suggestion...


Everyone went way too hard on the Dogs mid-season. They have a clear direction and we're seeing it.
— Kristian Pisano (@KristianPisano) August 10, 2013


We were already on the record after round 10 saying that the Dogs were alright.