Back in our first season blogging the AFL and applying rankings, we noted how Richmond were unlucky in 2012 after 9 losses by 21 points or under.
If only they turned half those losses into wins, and they would have been finalists last year.

Looking back at this season, and there is a similar story again... this time at Arden Street.
In 2013 North Melbourne have lost 10 games by under 16 points (and a fair few of them after leading by reasonable margins too).
The full list is here.

Again, if half of those losses translated to wins, you would see the Northeners now in the top 8, possibly as high as 5th.

If we assume that losing tight games increases resolve to win them next time, and we follow the Richmond example, then we can expect North to be back in the 8 again next year. 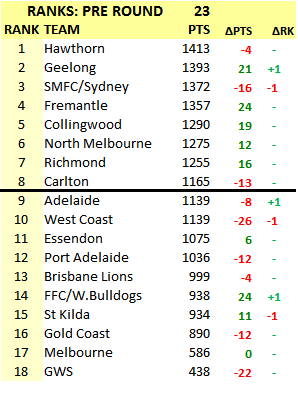 And if we look at our rankings (as at right, after round 22), we also consider a case for North's re-entry to finals in 2014.
We now have them 6th, and very much in the mix with the teams ranked 5 to 7.

We are also not alone, with Troy Wheatleys rankings putting North at 5th.
The team over at Footy Forecaster also pitch North in the top 8 mix, loading them up as 6th under their rankings system as well.