*Apologies for the delay on posting to our regular FootyMaths reader (you know who you are).

The AFL Charge Sheet against Essendon contains notations about CJC-1295.
Click on the link from David Culbert for a bit of insight as to why 'Sarah' and other Essendon players parents are worried.

None of the ASADA Affair will end well for the participants. And the more that comes to the fore, the more encumbent it is on the club and individuals associated wit the scheme to come forward.

It may have taken all year, but we have finally tipped one game exactly on the money. Carlton getting up by 1 is exactly what we tipped.

Otherwise, it was slim picking for footy fans with most of the top 8 teams playing ducks and drakes oon tactics and caring very little about gaining the 'W'. 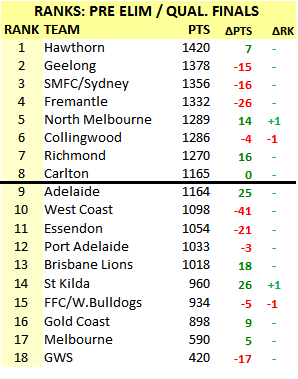 More blowouts too, with Adelaide crushing the Eagles, and the Suns recording their biggest win in the clubs history, but grain of salt time.... it was over the GWS.

As to the GWS, they finish their second season on 420 points, after starting on the benchmark 1000 points.
This season they have bounced around the 420-470 ranking point range all year, which is a very poor showing.

The 'bad news' Brisbane Bears also only dropped to as low as 590 points in their brief history.

GWS must be a long term prospect for the AFL. And it must show signs of life soon.
Posted by The FMI at 16:46