Our blog has a whole page dedicated to balancing the draw (along with conferencing the teams into three groups) by making sure every team plays two each of the top 6, middle 6 and bottom 6 teams. This is also done in such a way as to structure the methodology so that it is clear and transparent to all fans.

The Age has recently published some ideas that are being proposed by AFL HQ, as per this article:

Under the new model, the AFL ladder will be bracketed into three groups of six – simply 1-6, 7-12 and 13-18. To determine the five return or "double-up" fixtures for each club, a few straightforward restrictions are in place. Teams will be limited to a minimum of two and a maximum of three "double up" games against clubs in the same third of the ladder. For example, Hawthorn may only be scheduled to face the likes of Geelong, Sydney and Fremantle twice next season, instead of this year's outcome where the Hawks had to play five of 2012's top eight teams twice


While we think, from an initial view, that this proposal has merit, we will look further into it later and publish our thoughts later.

In the short term, we will apply our conference model to the 2013 final ladder (as below) to produce who we would suggest should play each other twice in season 2014. 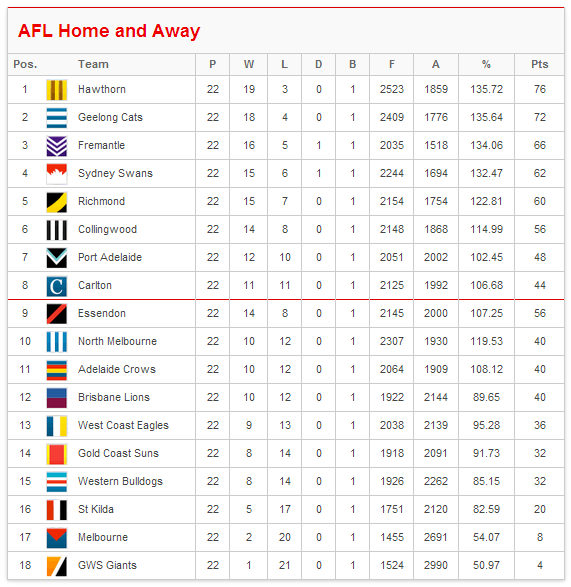 So into the groups (and to play each other twice):

Which means:
... only one Western Derby, one SA Showdown, one Q-Clash and one Sydney Derby.
and
... only one Ess v Coll, Carl v Coll clash.

But there are two Richmond v Carlton clashes.
Also, each team in a group also plays the teams in the other two groups once as well. And before commenters decry one group having 4 interstate teams and the other group only 2, well...
1) that is the luck of the draw, and
2) the teams playing in those groups will play less away  / more home fixtures against the teams from the other groups.
It can balance out with respect to travel.

All of the above hinders the AFL's directive to generate as much cash as possible (sorry) satisfy its obligations to is broadcast partners (sorry) schedule the most attractive games during the year and maximize attendances.

But what does do is balance the draw, give each lower team a chance to play a top team home and away, to increase their exposure and develop their brand. The lower clubs are not relegated to battles amongst themselves in some sort of lower strata ghetto. They are equal partners.

And the other beauty of this system is that it can be reproduced again next year, by any fan at home. Instantly and transparently, season on season. There is no waiting for the decrees from AFL HQ on how they intend to fixture while maintaining the gerrymander that sees fixed blockbusters and derbies.

The AFL is the biggest, most dominant sporting code in Australia, generating staggering revenues. It needs to become fairer, and throw away the crutches of the FIXture.
Posted by The FMI at 07:29