What a bonanza finals series for the AFL.
First, they tip out their 4th highest membership* team from the finals for 'conduct unbecoming', and then see the most popular and third most popular tipped out in week one.
This leaves only the club with the second highest membership base, who continue to be dogged by the rumours of dog and cat memberships fluffing up the numbers.

And adding to the revenue driven woes at HQ, only 52,000 for a Collingwood final at the M.C.G. is another kick in the shins to HQ.
...not that we advocate giving benefits to the most favoured clubs! Quite the opposite in fact.

* Melbourne based clubs, 2012 figures, via Wikipedia


THE RESULTS:
A week of upsets. What else can we say. 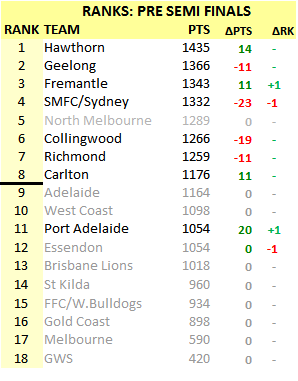 Fremantle rise over Sydney, and the top 4 mirrors the AFL ladder... finally.

Also Port Adelaide, playing finals football from our ranked position of 12th, take a big big leap over Essendon into 11th, to top them by 0.3 points.


And this is the second last blog-post before we take leave (one more auto-scheduled).

Good luck to all teams still involved, and we INTEND to keep updating during our break.