While the the season and finals series are now all complete, we will take some time to review.
Firstly, we will complete something we should have done during the finals series (but due to our vacation, didn't), and review how your teams went in the last third of the season.

We previously posted about rounds 1-8 on this post right here, and on rounds 9 to 16 as per this post here (Noting that the fixture had byes in rounds 11, 12, and 13, and the span from rounds 9 to 16 is really 8 rounds in total, but the bye sets this back to 7 games played per team).

First a look at where the teams were ranked after the first 8 rounds, the middle 7 rounds, and finally where we rank them after round 23. 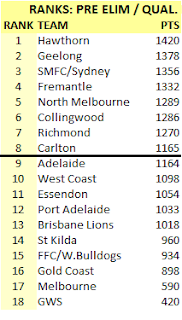 Focusing on the changes from before round 17 to after round 23, we can see the following most important changes...

- the rise of North Melbourne from 8th up three places to 5th,

- Gold Coast who took a leap over the Western Bulldogs (an established club) have been passed again by the same team.

- the further decline of the Saints, with another drop sending them down to 14th.

Comparing the Pre-Round 17 data to the end of round 23 data and the ranking numbers the teams hold, we generate the table at right that shows the biggest improvers, those that effectively haven't changed, and the big losers. 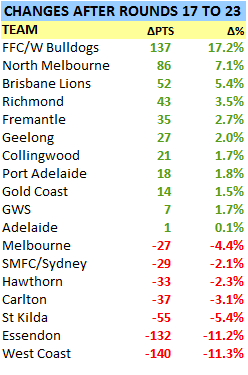 Using this assessment, we see the biggest improvers at the tail end of the season to have been the Western Bulldogs. A big 137 point increase represents a mighty 17% improvement, and our clear leader for this bracket of games.

The more modest improvers are headed by North Melbourne, who sneak above Brisbane. The Lions were the second most improved after the middle third of the season, and have kept up their momentum with another 52 point rise.

They were pipped for second by North, who collected 86 points in the last 7 rounds to climb to our 5th ranked team and be unlucky to not be finalists.

At the foot of the table are two teams that went close to being joint ‘worst teams of the final 7 rounds’... West Coast and Essendon. Both lost 11% of their ranking points, with West Coast down 140 points to be the worst, just edging Essendon who lost 132 points.

The previous worst from the first two brackets, Melbourne (first 8 rounds) and St Kilda (mid 7 rounds) both were slightly better. The Demons lost another 27 points while the Saints another 55 points. Much work to be done at these clubs to improve. And the example set by the Bulldogs from the last 7 rounds of the year suggests it can be done.

Also, as we have mentioned in the blog before, Hawthorn continue to slowly headed back to the pack, dropping another 33 points in the final third of the year. Still the best team by our rankings, but losing some of their gloss. 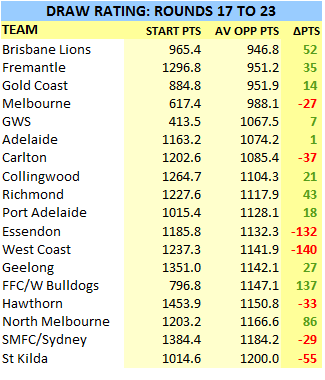 This table ranks teams sorted by ease of draw, using the average of the opposition teams rankings points.

So, in this final section of the season we see that Brisbane, Fremantle, the Gold Coast and Melbourne had the easier draws, with all teams bar Melbourne improving modestly.

Note also: the original post on rounds 1-8 had the same teams having softer draws, and the rounds 9-16 analysis had them having the toughest of the draw... so there is a degree of balance to the fixture as well as opportunity for the lesser teams to tackle clubs of similar strength.

At the other end of the spectrum, St Kilda and Sydney had met the highest ranked opponents, and dropped rankings slightly.

Highlights of this table are:


- the Western Bulldogs had played against some of the toughest set of opponents and still gained the most points, up 137. A nice effort, and assuredly ‘no tanking’ out West.

- Our two worst performed teams of the last 7 weeks, as identified above - West Coast and Essendon, both had similarly ranked opponents in those last weeks. Our data lists them as having the 7th and 8th hardest draw, but the average opposition ranking number is lower that their starting ranking, suggesting a relatively easy draw.


We will look at this type of data next season, and also later this year review each teams’ performance over the whole season.
Posted by The FMI at 08:40