During the season we updated (infrequently) a dedicated page to teams beaten by 60+ points, who get dropped into our Blow Out Bin. The blog post (now mirrored on that page) detials the events of 2013 where games went beyond a 10 goal margin.

The below table (click to expand) is complete for 2013, with 41 games in total with a 60 point or more margin.
Also on the table are '2012 season benchmark' figures as a means to track improvement. There is improvement in the overall number (down 11 games), with a reduced number in the +80 point bracket and the +60 point bracket.
This seasons blow-outs of +100 points or more though remain in similar territory to 2012 (the VFL/AFL's worst season for extended thrashings, see the chart in this post for historical analysis... and yes it needs updating!). 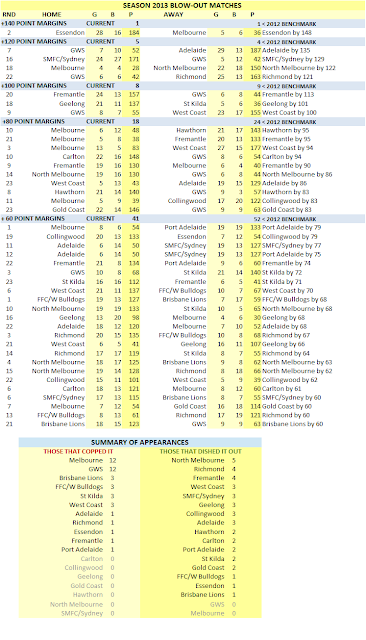 Of more immediate concern for the AFL is where the blow-outs have been.
At the foot of the blow-out games listing is the sum of teams involved. Clearly the concern for the AFL must be on returning Melbourne to a competitive level, as well as developing the GWS.
Both clubs were far and away the worst performed on field this year, both suffering 12 blow-outs each. Looking at losing margins for both teams, Melbourne averaged 64.0 points for the season, and the GWS averaged 71.6 (compare to league-wide margin for all teams as 37.9).
And when Melbourne and the GWS were thrashed, they were thrashed hard: Melbourne averaged 88.6 points in games +60 points on the margin, while the GWS went to 95.9 points.

Under the auspices of the AFL, we have already seen the beginnings of regeneration at Melbourne. The Roos Factor has already offered Dees fans hope.
Is there more a-foot at GWS? As of now, there have been only playing list tinkering, but will this be enough?


Also of note, the teams that did the most damage are a surprise to us at the FootyMaths Institute.
None of the previous seasons power clubs are there. Instead it is North Melbourne, Richmond and Fremantle who inflicted the most drubbings.
While this could be a quirk of the draw, it also might be a pointer to the future, and the hunger these teams have for success.