We at the FootyMaths Institute locked down the blog into an early 'sleep mode' as we headed off for a break mid September.

During this time, we ran limited blog posts with estimated tips, purely as our accessibility to Ol' Bessie was restricted.

Those tipping posts are linked through this post, which will summarize the tips, results and adjustments in the rankings tables.
So working back through the finals in chronological order...


Finals Week 1: Elimination and Qualifying
These games were actually covered in the blog at the time (post here), so there will be no reworking of those numbers again now.


Finals Week 2: Semis
We were able to get the valves warmed up early on Sunday night after Finals Week 1 and create the predictions in this post, then schedule the post for later in the week... and all that technology actually worked.
As to our tips... the results actually went our way in Finals Weeks 2, as we booted home both winners and were very close on the Sydney result.

Despite the loss, Port Adelaide finished the year strongly with 17 more points and 1071 in total.
This changed the rankings values but no positional changes were noted.
In fact, there were no further positional changes for the remainder of the year, so the only ranking table in this blog post will be the seasons end on at the foot to the post.


Finals Week 3: Preliminaries
By the time week 3 rolled around, we had limited internet access and even more limited access to our databases and calculations. The predictions posted were educated guesses that, in hind sight, turned out to be close to the mark to what our calculations actually returned as tips.

(Our educated guesses were for the Hawks by 9 and Dockers by 13... not too bad)

No post-game summary was made available then, so it is attached here.

Hawks win by slightly less that we expected, so both teams move by the barest of margins, and Fremantle booked themselves into their first grand final.

As for the Grand Final, you all know what happened... it has been run and won.
Leading into that game, we had slightly improved access to the internet, and were able to post this, including a bit of commentary on that most remote of thoughts... that Hawthorn could be considered as sentimental favourites in a grand final against the Dockers. What nonsense!

We again estimated a tip, going with the Hawks by 9 points. Now with the computers all firing again, the real tip was...

(and again... not bad on the mental arithmetic by the Institute staff).

The actual game result was also very close to our tip...

This meant not much change for Dockers rank, and a higher improvement for the Hawks.


End of Season
So, overall, the final rankings of all teams after the 2013 season is as per below (and compared to the start of the season under the blue bar). 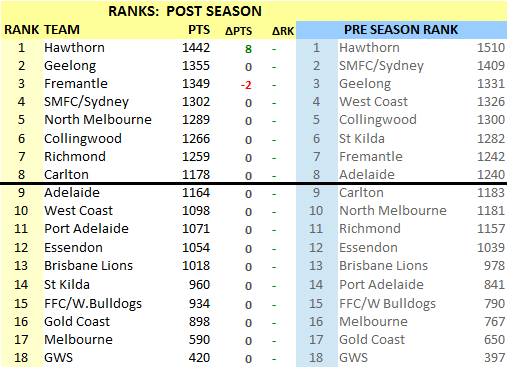 The season finishes with Hawthorn still on top, Geelong running back up into 2nd as Sydney tailed off at the end of the year, and Fremantle a close third.

Great effort this year by the Dockers, lifting themselves 100 ranking points and 4 places in the table. North Melbourne were also the other season standout (from  positive perspective), gaining 5 places.

At the other end of the spectrum, St Kilda fell an impressive 8 places, with 5 places dropped in 4 weeks!. Joining them as the other team with the biggest bust of the season was West Coast. The Eagles fell 6 places in our rankings, mostly in the last 6 rounds.


Finally, to track your teams ranking position through 2013, we complied the chart as below. Normally we don't like publishing such messy charts, but it is the only effective way to present the whole picture. 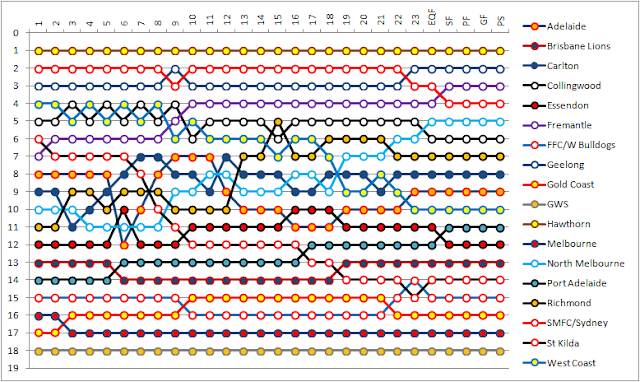 We will look to review the season further between now and the end of the year.
Posted by The FMI at 22:33