In the history of the VFL/AFL, there have been the eight foundation clubs, and an additional 12 clubs added to the ranks. Of these new entities, one has withdrawn, while another has also disappeared from the playing roster, having been merged with a foundation club.

How can we measure each club over its introductory period? Can we take the same premise as used in the 7-Up series?


The premise ... was taken from the Jesuit motto "Give me a child until he is seven and I will give you the man", which is based on a quotation by Francis Xavier.


Of all these 12 new clubs, only one stands alone as having a horrendous first two years.

The GWS Giants using our rankings, are head and shoulders above the rest, as the VFL/AFL's biggest basket-case of expansion teams.

Two years of competiton (in the case of the Giants) is perhaps not equivalent to the Xavierian premise of the first formative seven years, but taking a broader approach, we will look at the first 44 games.


After the Giants initial 44 games, we have them ranked on 420 points and 18th of the 18 clubs. They are also 170 points away from their nearest rival.
We can quickly compare them to the Gold Coast Suns,as the other most recent entry to senior professional football, and another team established with similar draft and salary cap conditions.


The New Teams On The Field
The time line of these two teams ranking performance over their first 44 games is at right.
While the Suns were able to improve slightly in the last 10 or so games of their first 2 years, there is less signs of life from the Breakfast Point boys.

Of particular note is the Giants' decline from around 650 points to 360... a precipitous drop when they lost 10 of 11 games by an average margin of 96 points.

Expansion: 80's and 90's Style
It was the era of nationalisation, and the then VFL started two new franchises, and re-branded itself as the AFL. It also brought in three more, while fare-welling a foundation club.
After 44 games, the expansion teams that took to the field in the late 80's and 90's have their time line of rankings points charted for comparison against GWS as at right.


Expansion: In the 1920's
It took the VFL administrators over 60 years to introduce more expansion teams.
The 1925 starts of former VFL team  Footscray (now Western Bulldogs), North Melbourne and Hawthorn have also had their first 44 games rankings are plotted against the GWS as per right.


Expansion: The First Two
From the initial 8 teams in 1897, the VFL expanded in 1908 with two new teams.
They added Richmond and University (after toying with the idea of North Melbourne), and again, these two teams rankings records are plotted in reference to GWS at right.

The First 44 Results
While our data shows the GWS adrift and clearly in trouble, the actual raw data of the first 44 games of each new club also backs this up. 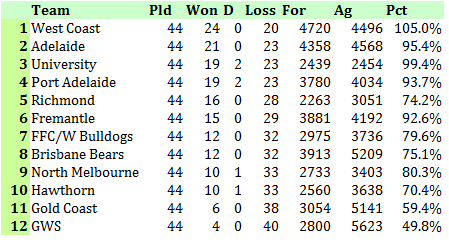 The table at right is the wins/losses table, plus for/against results for each team.

No surprises to see the first established of the non Victorian teams leading this table, as they drew upon players keen to return to their home state, as well as the best of the local leagues.

And of interest was the reasonably good start of University, who owing to the growing professionalism at the time, combined with the onset of the First World War, eventually disbanded after the 1914 season.


Giants' Context
While the above data clearly indicates problems with the GWS Giants on the field, we can see mitigating circumstances to their case.
The Giants (and Suns) were introduced under a modified draft structure that has meant that they have had limited access to bigger and more mature footballers. In particular, the Giants in the main went for youth as their drafting strategy, more so than the Suns. Pitting these younger men against better conditioned and experienced athletes was always going to be an exercise in patience.

The Suns did draft and secure a more experienced core of players, and it could be argued that they have seen benefits from this. Nonetheless, both of the two recent teams are clearly behind the eight ball when you compare them to the other entries to the VFL/AFL.
The below data highlights the youthful teams that both GWS and the Gold Coast fielded.

Its a telling indicator that the two youngest teams sit at the foot of the that table. The next youngest, University, comes from a very different age of football. Where players were mostly amateur, working other jobs during the week. Condition of the bodies was much more similar amongst all teams then.

Those other expansion teams were also founded with a core (and more) of players who were older and more experienced at lower levels of football.

The Brisbane Bears were set up in an unusual way, by modern standards. Without access to a strong local playing base, they were formed from 2 players from the other 12 clubs, as well as drafting other players from across the country. The players released by the 12 clubs were an odd mix of those that wanted to go for the cash, and those discarded by clubs.

With all the playing stats and histories of the assembled clubs, the table above makes sense.


- Teams with mature bodies and experienced players playing as virtual state sides have thrived.
- When football was less professional, the gap in ability was less of an obstacle to future success.
- As the degree of professionalism increased, the gap widened (the 1925 inductees show this).
- If you structure a team around rejects and cast-offs, expect to struggle (Brisbane Bears).

Perhaps a few more seasons in the NEAFL for the Giants might have helped, but the above table suggests not by much.
For the GWS, the only way is to build the players they have, and only time and competition can do that.
For the sake of the AFL administration and competition, we hope there is genuine improvement in 2014.
Posted by The FMI at 09:46