Now of course when any sporting competition is run, it is to find the best team/individual. We have compared our ranked teams over the decades against the competitions best this week, at this blog post.

We could also, for the very cheap thrills that they are, now look at the other end of the spectrum. The teams at the bottom.

Again, this is counter the reason we rank teams this way, but the table below shows just who finished at the foot of the rankings after each VFL/AFL season. 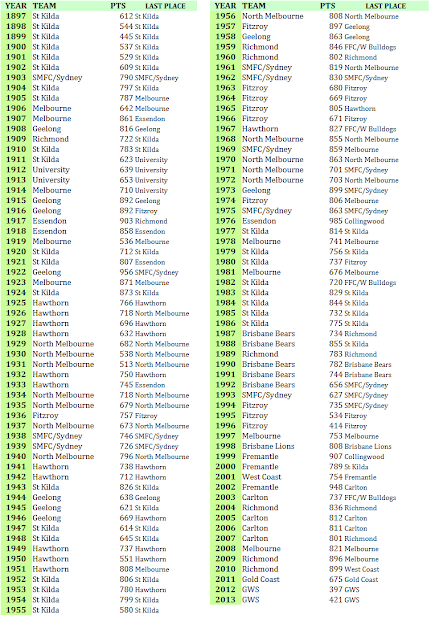 Next to each of those teams is listed its ranking points at that time, and also the league 'wooden spooners' of that year.

While our rankings of the BEST teams aligned with the seasons Premiers in just under 60% of the time, there is a stronger correlation between the worst teams.
Over 117 seasons, our worst ranked team has won the wooden spoon 2 out of every 3 years (67% of the time).


As per the Premiers post, the above  is a very big and busy table. What we need to do is boil it down to a total over the whole period of VFL/AFL football history. 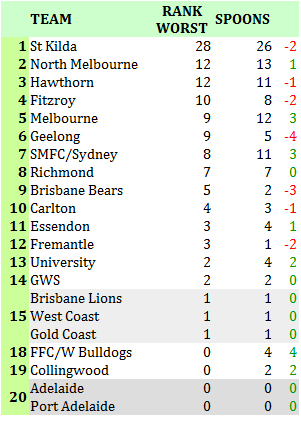 ...And for the sake of splitting the teams, the table was sorted by our rankings totals first, then by total number of premierships.


A few anomalies in the table...

1) Geelong have escaped more spoons as we ranked them worst on 9 occasions.
So too the Brisbane Bears, who should have had a few more pieces of wood-ware

2) South Melbourne / Sydney have suffered worse, collecting more wooden spoons than deserved.
So too University and Melbourne, who we think were not as bad as the record suggests.

4) The only teams to not have won a wooden spoon are both based out of South Australia.