* No, not those sort of supplements.

Another blog post on rankings points, this time a bit of system-theory, and fun with Richmond.

System Theory
Last week we posted a few notes on the VFL/AFL's best and worst teams, as we rank them, and how they aligned with the season premiers.
From this, we were asked on twitter about the gradual increase in the ranking of the seasons best team.


@troywheatley @Footy_Maths An interesting conundrum is the ever increasing ranking. Do teams get better over time?
— Lucas Garth (@lucasgarth) November 19, 2013


The data presented in that first blog post (and we have also done similar for the worst ranked team as well) can be graphically represented as per the right. 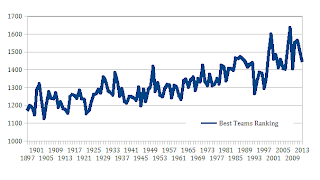 Here the trend to ever increasing rank points total is seen (with some waxing and waning) as teams move up and down game on game, year on year.

The blue line shows an increasing trend for the best teams to have a higher rating over time. 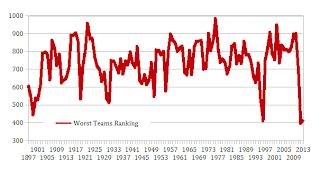 At the other end of the scale though, there is a less than clear trend visible. The chart is much more erratic as the worst teams drop to lows and the troughs are quite deep.
Nonetheless, there is, over the 117 seasons, a slight upward trend to that chart.


So plotting the best and worst teams shows increasing rankings points, but as outliers do they reflect the completion as a whole.

The below chart is the average of the teams rankings points for all teams and all seasons. 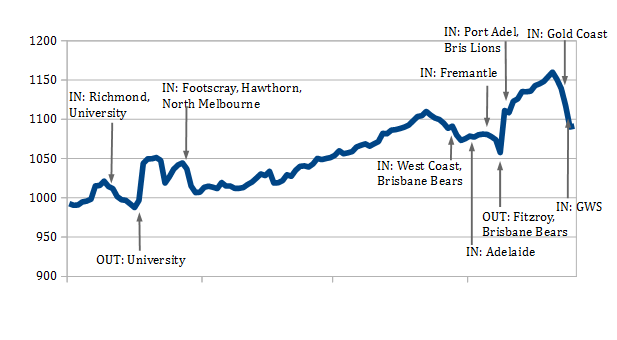 Here, the trend of increasing rankings points is seen clearly. We have also identified some of the wild changes and change points on the chart.
There are two key points on the chart that can be noted when teams enter, or leave the competition

As new teams enter, they start on 1000 points but usually their rank points allocation falls after the first season and beyond. As a result, a bigger pool of teams with new teams sub 1000 points depresses the average rankings points of the whole collective

As an existing team drops out of the competition, there is a corresponding leap of the average rankings points the following season. This is evidenced by the three instances of teams dropping out of the VFL/AFL (University, after the 1914 season, and Fitzroy and Brisbane Bears*, after the 1996 season). The following season had seen an almost 50 point increase.
Obviously, a now smaller pool of teams, with lower ranked teams gone provides a boost to the average overall.


* We have considered in our system that the Brisbane Lions are a new team (entering at 1000 points) and that the Fitzroy and Brisbane Bears rankings entities ceased as of 1997.


Richmond
Over at the 'wooden spoon' blog post in this series, regular blog commenter and Tigers fan asked "how many times has Richmond been the 9th ranked team? ;)"