Competition is a Good Thing

Business and economic theory suggests that competition is a good thing... both for business, innovation and consumers.
We embrace the competitive spirit in football, where we have written many times about the need for fair and even competition, and even proposed a fair and balanced approach to the draw.

We also embrace the competition in ranking teams outside of the traditional AFL ladder framework. Our blog is not the only effort out in the market, with others such as Footy Forecaster, MAFL Online, the WayBeyondRedemption blog, Roby at BigFooty and Troy Wheatley's Power Rankings also attempting to rate teams realistically at any point in time.

To add to this we also know of others who do their own private systems, and we join in the MAFL online call for others to get creative and try their own method, as well as to go public with it too.

Competition and different players in the market drive innovation. Join us and have a go.


In a later post, we will further benchmark our 2013 data against others in the field, but for this post we found a recent update at WayBeyondRedemption that we thought we would run a comparison against now.

That post, "Model version 9 over the years", shows Micheal's model (version 9) applied to all seasons of VFL/AFL history. 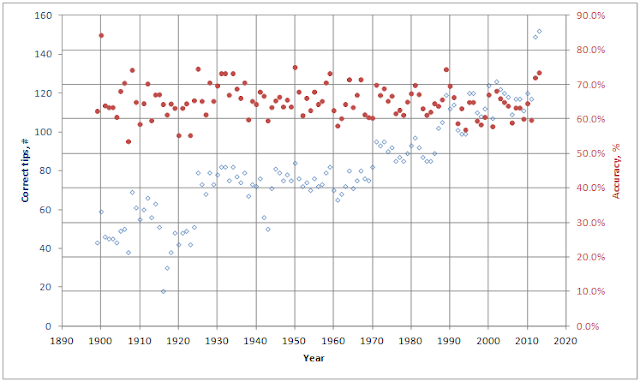 The blue dots represent the absolute number of correct tips per season, and the red dots are the accuracy percent of those tips.
Note: For 2013, accuracy is ~72% based on ~150 correct tips from a 207 game season.

What you can see here is a very steady and consistent tipping regime of 60-70% accuracy year on year.


We were inspired by this post to produce our own chart based on our version 2 algorithms, and we could produce the chart as below. 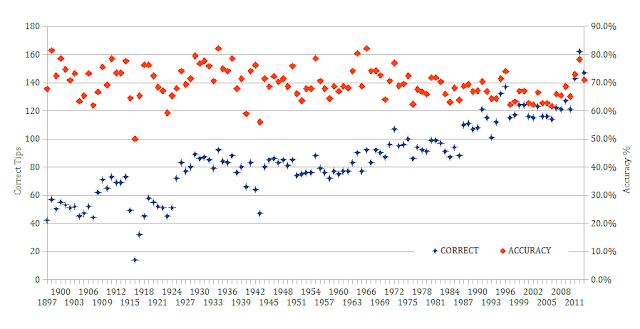 Again, the blue dots represent the absolute number of correct tips per season, and the red dots are the accuracy percent of those tips.
Note: For our 2013 season, accuracy is ~71% based on ~146 correct tips from a 207 game season.

We are also striking in a similar zone, between 60 and 70% accuracy over the recent 40 or so seasons (since the late 70's). Prior to that there was a higher frequency of higher 70% to +80% accuracy on tips.
We suspect that the more recent lower tipping accuracy is due to the more equal nature of the AFL competition, particularly the 2000-2009 season period, where equalization was a key plank in the AFL's growth. 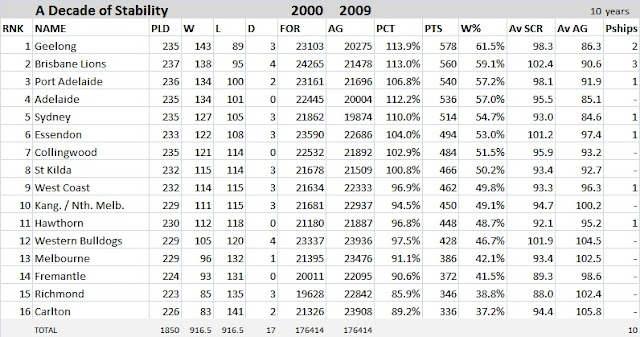 In this period, 7 separate teams won the flag and the divergence in percentage was also lowest over all teams in the competition. This is the most diverse and balanced decade in VFL /AFL history, and we found it the hardest to tip accurately, tipping right only 64% in that decade (compared to the overall number of 70%).
We have also highlighted the 2000's as a great ear in football on this post, as the renaissance after the preceding 2 decades that almost killed more clubs than just Fitzroy.


Histogramming the above tipping data produces the chart at right.

The blue bars represent the number of times we have tipped to a percentage accuracy.
The red bar is the median (middle point) for the 117 data points
Including season 2013, the average (mean) is 70.2%.
The yellow bar is the 2013 result... happily on the right side of the median and mean!

We have to also be concerned that our tipping performance is showing a declining trend over the 117 season collected data above... how to correct for that is another problem.

As we have mentioned before, our tipping is not only concerned with getting the right tip, but also tipping the margin well... with the aim of bettering all comers at the Monash University football tipping competition. This will be covered in a later blog, but suffice to say, the results are extremely variable.
Posted by The FMI at 08:34