We crunched some numbers yesterday around the World Cup draw, and likelihoods of Australia's groups.
As we have now found out, Australia is grouped with Spain, Chile and the Netherlands... and the papers have already gone into "Group Of Death" mode


The Age:     Australia in nightmare 'Group of Death' for Brazil World Cup
The Guardian:     World Cup: Socceroos face Spain and Holland in group of death
The Australian:     Australia can only grow by playing against the best     "AUSTRALIAN fans should embrace rather than fear the possibility of a Group of Death scenario at next year's World Cup in Brazil."
The Herald Sun:     Regardless of the draw, you can be sure Australia has the group of death at the World Cup


But out of all the groups, is it fair to say Australia has the group of death? Well... maybe, but then the European press are also citing a different "Group Of Death".


So... what really is the Group of Death in this World Cup?

First... here are the groups with each teams FIFA Rankings points alongside.

Using the FIFA rankings points and tallying them all up, the group composed of the strongest 4 teams is actually Group G - Germany, Ghana, USA and Portugal.

Which would make this group the actual 'group of death'.

The chart at right indexes each groups points ratings, so you can comparatively see where each group sits on a toughness scale (where 1 is the toughest, and 0 the easiest)

The second toughest group is Group B (Spain, Chile, Australia and the Netherlands), then the next after B is Group D (Uruguay, England, Costa Rica and Italy).

And the easiest group is H, composed of Belgium Algeria, South Korea and Russia

Sorry Australian and European press, but you have missed the mark.

Of course, the above is looking at each group as a whole and referencing them against the other groups.
How the national press and supporters see a 'Group of Death' is different though. It is about the degree of toughness of the opposition to be faced.

Accordingly, we have created the four indexes (as per the above scale, 1 toughest, 0 easiest))

So we can now look at the teams drawn from each of the pots and determine the toughest draw as per each countries perspective.

Starting with the seeded teams from Pot 1, Germany have the strongest opponents to play, with Uruguay close behind. These two are clear of the third hardest drawn nation, Spain
At the other end of the scale, Argentina just shade Belgium for the easiest draw.
Host nation Brazil has a relatively easy group, along with the Swiss.

The teams from Pot 2 (and England from Pot 4) pays oput as per the chart at the right, below.
Here Ghana will feel aggrieved, as they have the toughest opponents of the CONMEBOL and CAF teams (and England from UEFA). And by quite som margin too, as the nearest tough draw belongs to Chile, but they are quite a way back.

The remaining 6 teams have relatively even draws... all under half as bad as Ghana's.
Algeria have an easy list of opponents, with Nigeria and Ecuador also fairing well.

Australia is in Pot 3, and find themselves with the toughest of draws from the teams from CONCACAF and the AFC.
The USA and Costa Rica are second and third, but a relatively big distance behind (though not as far as that between Ghana and Chile)
Four teams are crammed into the bottom fifth of the index chart, Honduras, Iran, Korea and Mexico. Relatively easy draws for those four nations.

The UEFA teams in Pot 4 have produced possibly he most even spread in the draw toughness index (vying with the seeded teams).
From this pot, Portugal find themselves as the UEFA team with the toughest run, with the Netherlands not far behind.
Russia are allocated the easiest draw, with fellow Eastern European nations Croatia and Bosnia-Herzegovina close by.

Finally, we can determine the overall draw toughness ranking. 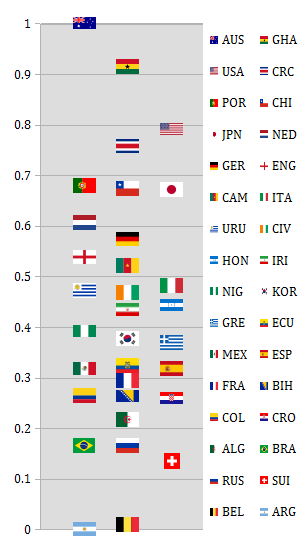 Using the calculations based on each teams opponents total rankings points and index these to determine the toughest draw for the whole 32 World Cup nations, as per right.

Under this classification, Australia edges Ghana for the toughest draw, with the USA and Costa Rica in 3rd and 4th.

The easiest paths belong to Argentina and Belgium, almost even matched in the index.

The host nation also has an easy path, as we rank then with the 5th easiest opposition (with Russia and Switzerland in 4th and 3rd).

So by this, the Australian press is indeed right, while the English/European press is off the mark about England in the 'Group of Death'... in fact they have almost an evenly balanced draw.

Worth noting too, that these numbers are also not indexed by the strength of each nation. With Australia as a footballing minnow on 564 ranking points, the leap to challenge say, the Netherlands on 1106 points, would make the draw index at right even more skewed.
Perhaps that is something for another blog.

Of course, these indexes are purely based on the teams FIFA Rankings, and there are other factors that come into play. The UK Mirror link above alludes to one, (the 'jungle rumble'), while news services have also highlighted the long journeys (and poorly serviced air services) to and from some venues for teams (such as this on the USA's schedule).


All that said, many things can change between now and the final whistle of the group games.
Will the groups pan out as pundits predict/
We will watch next year with interest.

P.S.  This is really good too... the SPI World Cup group stage projections.
All we need to add to that is... Australia? Oh dear!