While we focus here mainly on Australian Football (of the VFL/AFL variety), we do take an interest in other codes as well.
And, tonight (Melbourne time) there will be the allocation of teams into groups for the biggest sporting event in the world - the 2014 FIFA Football World Cup.

Folks we follow on twitter have been pre-empting the draw using this fabulous simulator, and coming up with the odd grouping, and forecasts of joy or misery for Australia. We have seen these, and thought that one or two random run-throughs using the draw simulator is one thing, but what about building a bigger picture and more data, and try to predict what could really be the draw.

So, we have used that same simulator and conducted 100 simulations to determine the most likely opponents, and the most easy and difficult draws for Australia.


COMMON OPPONENTS FROM 100 DRAWS
With Australia placed in Pot 3 with other AFC and CONCACAF teams, we cannot be drawn against them. Instead, we are to be drawn only against teams from Pots 1, 2 and 4... possibly as below.

Australia's Likely Opponents From Pot 1.
Pot 1 contains the seeded teams for the world cup draw... with seedings based on the FIFA World Rankings. 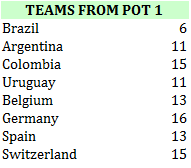 The rankings are as determined by the governing body, to calculations similar to what we do here for AFL teams.

Being a random draw for this pot (other than Brazil automatically drawn into Group A), the 100 simulations undertaken performed very much to theory.  There is very little to separate the opponents, with an almost universal likelihood of meeting anyone from this pot.

The most drawn candidates though were Germany (16%), Switzerland and Colombia (15%)


Australia's Likely Opponents From Pot 2.
Pot 2 contains the teams from the CAF, and the last two CONMEBOL teams (Chile and Ecuador).

This pot is also affected by the FIFA decision to place all the unseeded UEFA teams together into Pot 4. This has meant that Pot 4 has 11 teams, and Pot 2 only 9 teams.

In our simulations, we only drew teams from Pot 2 90 times, as there were cases where a team from Pot 4 crosses over and is drawn in the stead of a Pot 2 team to face Australia in a group.

In this pot, there are other rules at play that prevent Chile and Ecuador from being allocated into the same group as a Pot 1 CONMEBOL team. Accordingly, there is skewing of the numbers here, with just under 1/3rd of the selections favouring Chile and Ecuador combined (based on the 57% of Pot 1 teams coming from UEFA).

There was no restriction on drawing CAF teams, so it is a little surprising to see a wider variety of selections (from 7 to 22%) given that it should be purely random.


Australia's Likely Opponents From Pot 4.
As before, there is some cross-over of teams from Pot 4 into selections from Pot 2 as there are 11 UEFA teams in this pot. 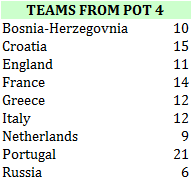 In our simulations, we found only 10% of the time a team came from Pot 4 as a 'Pot 2' selection drawn against Australia. This created a pool of 110 selections from Pot 4.

From this pot, other than the one team being drawn as a 'Pot 2' team, the draw should be completely random. And generally, our selections  in simulation found an even spread of opponents, with three outliers.
For some (random) reason, Australia

There is no logical answer to these outliers


GROUPS FROM 100 DRAWS
With the 100 draws completed, we also could examine the toughest and softest draws dealt to Australia.

The Path of Least Resistance.
Using both the rankings points from the FIFA website (as of 6 Dec), and the ranking position, the easiest of the 100 draws, we could determine a rating tool for splitting the best and worst draws for Australia.
Adding the opponents ratings points* and also tallying the opponents ranking position**, the ease of draw (or group of death) could be calculated.


The easiest draws we found using the total FIFA rankings points were...

Working from the positional ranking tally total, the best Australian outcomes were

Using the same system of totaled points, the groups of death for Australia were found as follows (remembering a higher rankings points total or low positional tally is unfavorable for Australia in this scenario).

And the 'Group Of Deaths' our 100 iterations found were (based on rankings points)...

The three other worst outcomes for Australia - sorted by total opponent ranking points were...

with a three way split for 4th and 5th places.


And it would be fair to say (as the realists that we are at the Institute) that whoever Australia draws at the World Cup, we will have a very difficult time against.
The 59th ranked Aussies closest opponent is Cameroon in 51st, followed by Nigeria at 36th and Algeria at 26th (excluding the CONCACAF and AFC teams).

It is a steep mountain for the Aussies to climb in Brazil. Best of luck lads!
Posted by The FMI at 17:41