The FootyMaths Institute today welcomes a fourth Guest Post, from our fourth guest writer. It touches on a subject we have covered at length before here, here, and this, our most popular post where we detail one mechanism to increasing equality.
It is a topic we feel strongly about, as it is fundamental to the health of the AFL into the future.
We welcome this special guest post, and trust you will all read it carefully and with open minds. Comments, as always, most welcome.

Today's guest writer is Sean Ross (@sjhross), an avid Richmond fan now living in the AFL's toughest market. He has also blogged his own experiences following Richmond, and awarded the most unique of awards for club players that are the best performed, but outside the known club elites, The Jurica Medal.
He is also aware of the mathematical machinations of footy, having blogged the  2013 'Richmond road to the finals', which, in our opinion, was an excellent and unique way to track a teams progress week-on-week.
---


The Broady Boy Has Gone Toorak


“Socialist governments traditionally do make a financial mess. They always run out of other people's money.”


“I have a daily fight with the AFL to stop them picking our pockets and we have to now try stopping our opponents - the people who come out and say they hate us and all the rest of it - from living off us and we have some real issues with that.”

Fresh from insulting Adam Goodes, picking a fight with Tim Paine, and recovering from the devastating loss of his beloved Stokehouse, Eddie has his gaze set upon the ragtag misfits that makes up the AFL’s Have Nots.

Soon after enjoying a trip, on the AFL’s coin, to the USA to learn about equalisation in the NFL, Iron Lady McGuire showed how much he had absorbed from America’s finest at Collingwood’s AGM earlier this month.Taking the stage and stirring the faithful with gems such as


“We don't mind equalisation to a degree because we have to play someone – although Collingwood v Collingwood would get a good crowd - but we do draw the line at recalcitrant clubs who have leaders who come in for five minutes and disappear and leave a trail of destruction for the competition to mop up."

Remind you of anyone?
As humble as it was for Eddie to admit that Collingwood relies on others ‘because we have to play someone’, this seems somewhat out of out of line with the hopes of Andrew Demetriou before jetting off:


“We are trying to understand why in the NFL, where they have private ownership, that their equalisation strategies are producing a much more competitively balanced competition.”

Somewhere along the line ‘The uncertainty of outcome is very important for our competition, which they have got’ morphed into ‘I’m not anti equalisation but…’


Taking some license, it is possible to split the AFL into two conferences: 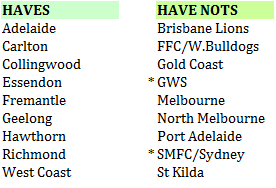 *Stop cringing at the New South Wales clubs with their bumper salary caps and marquee signings being on the Have Nots list, as they are more up against it than you think.

Do those lists groupings look familiar? Let me rearrange them again (as at right):

With the draft and salary cap in place, only two Have Nots managed to finish in the top half of the competition last year. In 2012, Haves (in bold) made up six the top seven on the ladder.

We should be worried about this.


Also interesting when looking at the  Haves and Have Nots is the 2014 fixture and the feature Thursday and Friday night slots.

There are 30 Thursday and Friday night matches during the first 22 rounds. Haves feature 45 times and Have Nots 15 times.
The four marquee fixtures (ANZAC Day, Easter Monday, Dreamtime and Queen’s Birthday) feature the Haves seven times and Have Nots once.

The timeslots and fixtures that are on everyone’s wish list are split:


Seemingly (and I would love to be told I’m wrong about this) Geelong’s President Carter (Colin, not Jimmy) is the only person in charge of a Have that is concerned, saying last year “It is clear the weaker clubs get a less attractive fixture, and you can quantify the effect of that.”.
The official club statement [PDF] on the GFC website is worth a read, as is the Western Bulldogs’ discussion paper submission [PDF].

The deafening silence of the other Presidents is damning.

While I am happy that Richmond haven’t taken the same chest beating stance as McGuire, I’m disappointed that my club hasn’t taken a position of support for the Have Nots. Especially considering that we have spent a good chunk of the last 30 years with our cap out in front of us (...and you couldn’t make it up who introduces that short, but great, doco).

McGuire has, mostly, got away with being a righteous git because he has linked his equalisation argument to the salary cap concessions granted to the Sydney based clubs, even though the two have absolutely nothing to do with each other. Think South Park, but ‘They took our full forwards’.
(I might share more about this if Mr FMI allows me another soapbox to stand on in the future.)
[Any time you like Sean... Ed.]

Like nearly everything else in life, Eddie has form on this.
Bleating in 2004 that Brisbane’s era of success was the result of cap concessions;


"It's 'Help Sydney and Brisbane because they were basket cases'. Now that's happened. Thankfully the Brisbane Lions are an absolute powerhouse both on and off the field. Everything we hoped for has happened."

At the time Eddie wasn’t concerned about the advantage Melbourne based clubs had when it came to use of the MCG during the finals, but was happy to crow about Brisbane being a powerhouse off the field when he must have known how untrue that was. And, even if they embark on another golden era, the Lions will likely never be a powerhouse off the field given the state of the Queensland AFL market.

Eddie’s patronising and pathetic ‘We don't mind equalisation to a degree because we have to play someone’ stance needs to be called out, because Melbourne, St Kilda and Brisbane do not exist simply to play against Collingwood. They need to be competitive and they need an equal fixture, distribution, and assistance for that to happen.

There is no silver bullet. The NFL’s policies wouldn’t have saved Melbourne from their drafting, development and administration of the last decade. But it would mean that the light at the end of the tunnel is a little closer and that they would not have been reliant on members dipping into their pockets every few years.

The proposals reported by Caroline Wilson this week are mostly the right things to do. Though I dispute that restricting the Sydney and GWS caps without any compensation is in the interest of the developing AFL.

Equalisation has been in the news this week and it will remain in the news all year because it is the most important issue facing the AFL.


City Hall’s stance is the right one, and Iron Lady McGuire’s is the wrong one.

Post-Script
I wanted to get to what the NFL has done, but might have to hold this over for another time. Basically they started a little bit before everyone else on this (1936) because the believe it’s important that “On any given Sunday, any team in the NFL can beat any other team”.

Gideon Haigh wrote a really good piece on equality in cricket earlier this year, and another in a similar vein from a couple of years ago, urging the NHL to follow. They are both good yarns and well worth reading.
Posted by The FMI at 20:13