01a- Back In Harness

OK, we are starting Round 1 this weekend, so its time for the first tips of the season.

Before the numbers, a refresher on where the teams stand as we start the year. 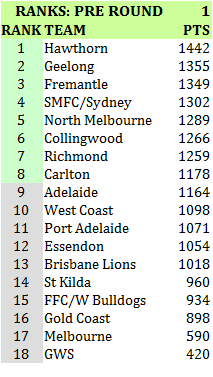 THE TIPS:
Into the start of the season proper, and we kick off with 4 games, and a bit of everything.

Collingwood and Fremantle the highlight, as Fremantle play away... as do Collingwood. Excellent laugh factor ahead.
The Sydney derby will again be another walk in the park, and the other 2 games might be around the 4 goal mark.

Most teams carry over a modest degree of form, except the Swans who fnished 2013 in a bad way.
Interesting point here is we tipped Collingwood just, but Fremantle have a slightly higher and larger circle, suggesting they may pinch this game against the tip.


* A teams position on the rungs above indicates how they have gone in the last 5 weeks... if a team is higher on the scale, its been on fire. If a team is at the bottom, they have cooled off and lacking form.
The size of the team marker indicates how we think they will run for the next 3 games... the bigger the marker, the more likely to win. Named after the blog commenter that suggested it.
Posted by The FMI at 11:11