Yep, its one of those rounds. It went on for an age and featured less than spectacular games.
And there are plenty in the media spouting off about both.

The drawn out farce of a two week round is something that can be fixed. And it is also something we have had in years past. Again, its a valid point to make, but hardly 'breaking news'.
What it may be is fodder for the AFL Fans Association, who seem to rally to a lot of causes, rightly or wrongly.

THE RESULTS:
Our tips were spread over two blog posts, but the results are packaged up in one neat bundle.

Quite a few big movements in rankings points after this round, with GWS, Port Adelaide, Fremantle and Essendon all collecting well, at the expense of Sydney, Collingwood, Carlton and North Melbourne.

Of course, the real tale of the tape above is a poor record of 4 correct of the 9 games. The only solace is that we were not alone on that front. 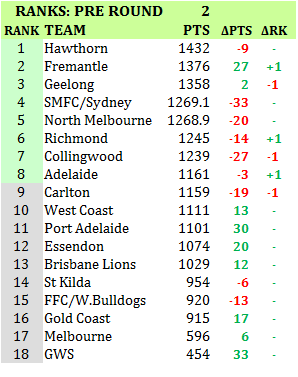 And over in the tabular form, it was a good week to be a bottom 9 side, as almost all of them registered gains.
There were three changes to the table, and 2 were because some teams sucked more than others.

Richmond rise after losing, but only as Collingwood were very poor.
The same is true about Adelaide. Losing by slightly more than predicted meant a rise only because Carlton lost a game they were expected to win.

GWS's win could be a taste of things to come... or maybe not. Last year we ranked them at +450 points in only 4 of the 22 games. Will they rise above, or again bounce around the bottom?

PS... how unlucky were we... in the pre-game blog we said


North Melbourne and Essendon to be the close one this week, and barring any last minute "Player 'X' did drug 'H'..." accusations to inspire the Dons, we see North winning by 4 goals.

Sure as night time follows day.
Posted by The FMI at 21:51