We are not so sure The Age's Rohan Connolly is onto anything here.
Crowds are down in case-by-case games yes, and numbers can be tuned to mean what you want if you are selective enough, yes. But there are more mitigating factors than just pricing.
For example...


"On a beautiful Saturday afternoon, with just one game being played in Melbourne, only 19,640 could be bothered turning up to Etihad Stadium to watch St Kilda take on Greater Western Sydney."

Given the Docklands is a covered stadium, why wouldn't people prefer to be outdoors on possibly the last great warm day of the summer? Didn't our mums always implore us as kids to 'get outside and enjoy the sunshine", instead of burning a beautiful day inside?
Yes, the roof was open, but still... when there is a wide world of sunshine out there, any almost fully enclosed stadia is secondary to some.
* Personal Note: I was on the roads a lot on Saturday afternoon, and the run from Sandringham to the City via the Beach Rd showed a lot of people (in the St Kilda heartland, no less) that were indeed making the most of the weather.


"on the other side of the CBD, 20,444 watched another local team do battle. Not an AFL team, though. This was soccer's A-League, with Melbourne Victory doing battle with Sydney FC at AAMI Park."

The codes biggest rivalry is used as the yard stick to measure against... St Kilda and GWS. Yep, that's legit!!.
PS: Footy Journo's - no more 'Code Wars as justifications any more... enough!

That's the 2014 attendance on a Thursday night in round 2. Compare that to the Thursday night attendance in round 1 of 2013 of 80,971.
Maybe the question shouldn't be about the " all-over-the-place scheduling of the opening round", but 'where were the Carlton faithful...?' Don't they pay to see an 'away' game?

And finally, that Essendon v Hawthorn...


"drew 44,163, less than all previous seven clashes between the two clubs played at Etihad, several of which were played when the home side’s season was already shot."

We suggest that, despite Essendon's 'record membership figures'*, there are enough disillusioned with what has happened with that club to not attend. That one clubs' "pharmacologically experimental" and globally embarrassing drugs program/scandal is also a factor (possibly bigger than ticket pricing) that is driving away fans.
* as loosely defined as club memberships are in this the modern club-memberships-as-a-dick-measuring-contest battle we live in now.


"If James Hird returns to Essendon, at the very least, he presents a moral crisis for many," he said. "I have spoken to more than a few. It's been a tormenting time.
"Somewhere along the line, for the sake of your own integrity, your own values, you draw your own boundaries. For me, as hard as it is, they [Essendon] cross the line with the return of the messiah. If James Hird returns to Essendon, I'd rather jump ship and take my chances at sea."


Or the cultural and social shift that 'JoeFloh' is undertaking, leaving the Dons for the Dogs (blog here).


"I couldn’t imagine the Bulldogs ever asking their cash strapped members to fork out for a multi millionaire former player who had brought the club to its knees through impatience, incompetence, vanity and pride. It was disgusting. Then I heard he would be welcomed back in the coaches box for finals. That was the last straw. If they were really keeping Hird on at the club, I was done."

And we are sure there are mothers and wives asking all around the country... why get involved in football when those pushing players to use drugs are rewarded?
Lets not underestimate the power of a scandal to damage a brand.

Later Rohan continues on about how variable pricing is the key, yet attendances at similar fixtures have similar numbers rocking up in 2013.
Apparently, the fans are as "mad as hell, and not going to take it anymore". And there is a 'considerable membership base' of the AFL Fans Association. As of today (11am 31-Mar) it's a sum total of 920 paid up members (Sorry - non-financial).

And Facebook says "2,876 people like AFL Fans Association" there. A force to be reckoned with, no doubt.


There are so many other issues at play in falling attendances, some of which, in fairness, get mentioned.
That games are live against the gate. Of games played in unusual time slots.
That the Melbourne has now a glorious Indian summer that keeps on keeping on.
That one clubs' actions (as caught by the ACC) has stained AFL football and Australia sport globally.

Its a bit unfair to focus on only one issue.


THE RESULTS:
Good to be back heavily among the winners this week, with 7 ships coming in. We missed on Adelaide and Collingwood.

Our Mezzoculo Index from last week alerted us to the opportunity for the Pies to go against the tip, but we did plainly miss the Adelaide loss.
Worth noting too that Ports ranking points number is almost the same as Adelaide (1138 to 1142 respectively) - a little side issue to monitor for the season. 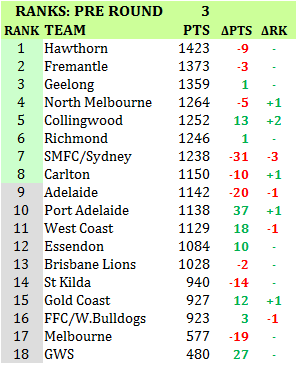 Lots of changes to the table, with the big and most noticeable change being the decline of the Swans. Another +30ish point drop sees them move to 7th.

North drop 5 points for winning in less than impressive style, yet climb one spot, and Collingwood also climb 2 with their win.

And at the low end of the table, the Gold Coast climb to 15th, their equal best ranking, and their best rating points number (927) since introduction to the competition.
Posted by The FMI at 12:24