Now that we have run you through the three posts on where each team is likely to finish (and the spread of expected wins), it is now time to tie all that data together and present the full picture.
Note: those three posts are here (SA/WA), here (Qld/NSW) and here (Vic).

And this year, with the fixture in place, we see a very interesting series of charts, almost a completely different look to the original 2013 prediction. In that post, the ladder positions formed a gentle curve down from 1st to 18th.
In this years analysis using the full 2014 season fixture (that the AFL acknowledge has been 'adjusted' so that teams play against teams of a similar level more), we have the below chart, displaying some unusual tendencies. 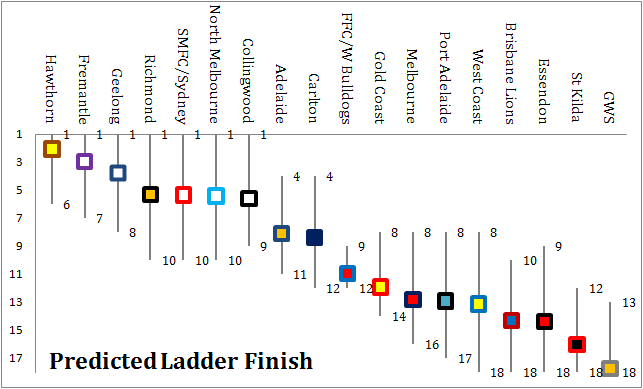 By the above (and all of the calculations we worked through to produce these numbers), we see a clear 'top three' in order as Hawthorn, Fremantle and Geelong.
The next four teams are queueing up for fourth... with Richmond just edging Sydney, followed by North Melbourne and Collingwood.

Then there is a bit of a gap in expectation to Adelaide and Carlton close contenders for 8th, and our program has tipped Adelaide to nudge into the top 8.
Tenth and eleventh seem clear cut for the Bulldogs and Suns, while 12th to 14 is a close run battle between Melbourne, Port Adelaide and West Coast. 15 than 16th are Brisbane and Essendon, and then we round out with St Kilda in 17th and the Giants at the rear.

And while some may rail against the positioning of teams in the bottom half, thinking a top 8 spot is likely, we don't see it in our calculations. We actually see two distinct groups of teams this season, with a real schism between top 7 and bottom 9, with the Crows and Blues bridging the gap. This is illustrated better later in a cumulative chart of the number of wins predicted.


The above chart was compiled from all our iterations of season simulations, and the percentage chance of finishing in ladder positions is as below 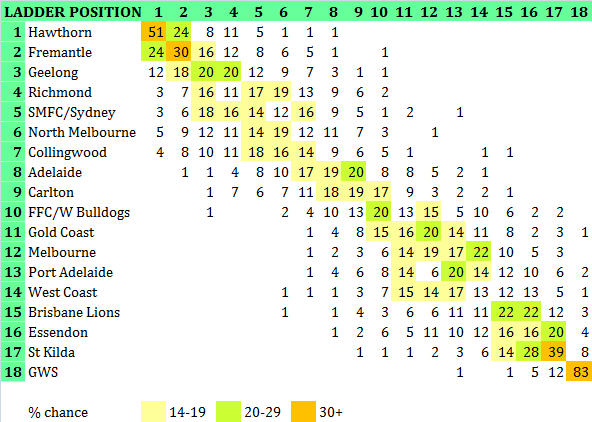 
Number of Wins Data
Looking at the possible number of wins in the home and away season, we chart up a slightly different result. These charts are formed from the same data as above, and the same ladder order is reproduced (unlike mid way through last year).

And again in this chart, there is a pattern of 7 teams at the top, with Adelaide and Carlton bridging a gap to 8 teams at the bottom, and the GWS in last. 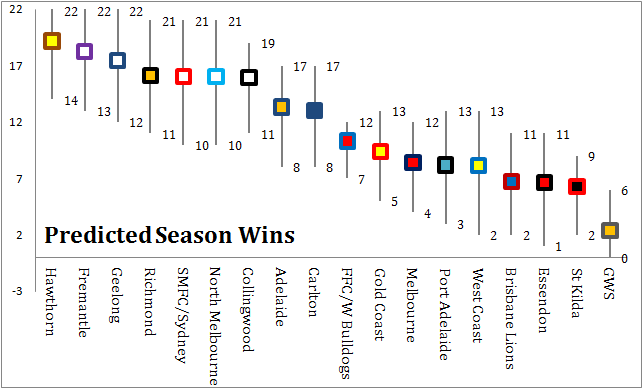 The finishing order above mirrors the ladder position chart in that;
- top 3 of Hawthorn, Fremantle and Geelong are clearly defined,
- 4th to 7th is up for grabs between Richmond, Sydney, Collingwood and North Melbourne,
- 8th and 9th to be fought out between Adelaide and Carlton,
- all the 10th to 18th places are grouped the same except for the GWS tailing off badly, as St Kilda have a higher expectation of wins.


Again, we have complied the percentage chance of wins as per the distribution table below. 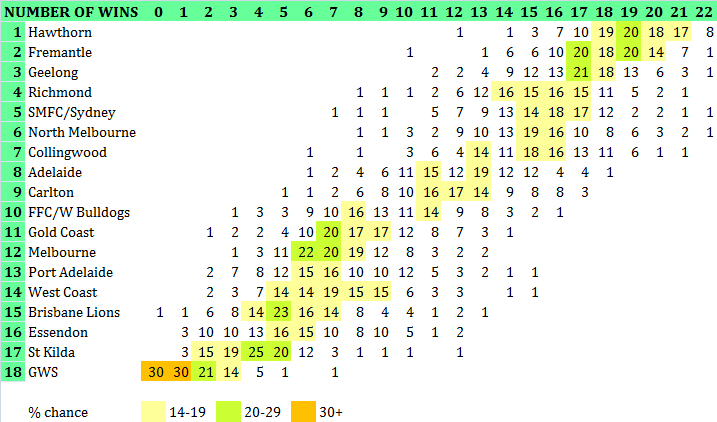 When we studied this table in a little more detail, we could see the schism in the teams as we mentioned before. Looking at the percentage chance for 10 wins, there is no team that qualifies for any more than a 12% chance. Its a clear delineation point. There are nine teams with the majority of their wins in the 11+ bracket, and another 9 in the unlikely to win 10+ games bracket.

It can be also highlighted by totalling up the numbers in the columns to produce this neat, binomial distribution.

Now, we haven't studied this further (yet), but does it highlight, or link back to any inequity in the AFL? Not sure, but given it is based on our estimations of teams, there is a fair chance it is an anomaly... but something to watch for as the season unfolds.

Something for another blog post later in the year.
Posted by The FMI at 08:01