As per yesterdays post, we have simulated the 2014 AFL season based on our rankings, with some leeway for variation.
This post is the second of the series, looking at the teams on the wrong side of the Barassi Line*.


LADDER POSITION:
Sydney look likely to stay again in finals contention, with a less than 10% chance of missing. It is difficult to pidgeon-hole them though. 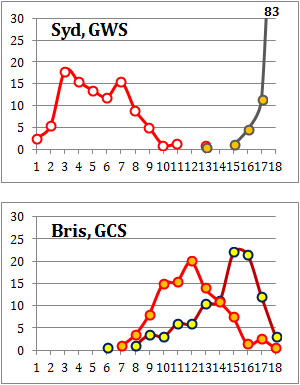 Their most likely position was returned with only 18% (second lowest), indicating a wide spread of possibilities
Our Tip:   3rd, 7th or 4th.

Brisbane are also looking at a tough season with a new coach in Justin Leppitsch directing them. A very slim chance to finish in the top half of the bottom 10.
Our Tip:   15th, 16th or 17th.

In what may be a surprise to most, we see improvement in the Suns such that they will finish above Brisbane for the first time. 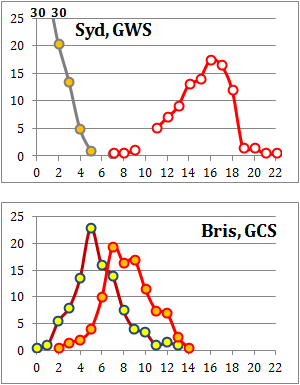 Sydney will be finalists if they can secure what we think is likely, a 14 to 18 win season. below that could see them out for the first time since 2009.
At the other end of the spectrum, the GWS Giants have a reasonable chance of 2 wins, and outside chances above that (up to 7 wins), but the numbers show a win-less or 1 win season as most likely.

In Queensland, Brisbane seem to be looking for a dire year, with 4 to 7 wins tipped by our calculations.
The Gold Coast on the other hand shine as the states best candidate, as we set them for a 6 to 10 win season. If they can do better and get 12 to 14 wins (11% chance), then finals might be the reward.

The next post will cover all the Victorian teams, with a following final post that ties together all these charts into our final ladder & number of wins predictions. 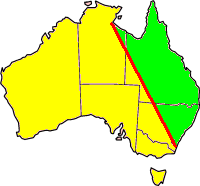 * The Barassi Line was first proposed by Ian Turner at the "1978 Ron Barassi Memorial Lecture", and it is a theoretical line that divides Australia into Australian Football followers (in the yellow zone at right) and Rugby code followers (in the green zone). It also can be used to denote the degree of media saturation of both code in those areas. While the line is arbitrarily drawn straight, it could be argued to contain more of NSW and Qld, though in southern NSW, both codes are almost equally popular.
Posted by The FMI at 08:01