As we did before Season 2013 (and also at the back end of it too), we have run some scenarios through our computer in an effort to determine where your teams will finish in the 2014 season.
These determinations are based on each teams FootyMaths ranking post 2013 season, with some factors altered to allow for improvement or decline.

The modified rankings are applied to each match of the 2014 AFL fixture. Each game is simulated, and scores determined. These are also fed back into the rankings calcualtions and they are adjusted as per a normal season. Each iteration is run for each game of the entire season, and we have run these iterations many many times over many 2014 season simulations.

With a body of multiple simulations run, we have determined for each team their expected final ladder position and also the number of games we expect them to win during the season.

In this first of the series, we will look at the teams on either side of the Nullabor.


LADDER POSITION:
The two South Australian teams will share a new home for the first time in 2014 when they move to the Adelaide Oval. This makes sorting their home ground advantage as a challenge, and perhaps makes these number a margin more rubbery than the already full vulcanised rubber that they are. 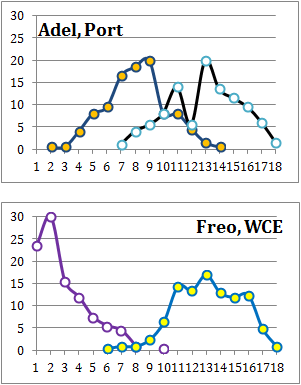 West Coast will need much to go their way to get in the eight this season, with mid bottom half the most likely result.
Our Tip: 13th, 11th or 12th. 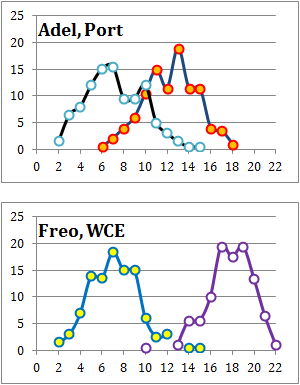 Adelaide look to have a positive season ahead, with a spread of wins 10 to 15 likely. As above, for the Crows to make the 8, they need to be at the top end of that window.
Port Adelaide have a slim top 8 chance, where 13 to 15 wins gets them there. More realistic is our calculated window of 6 to 10.

A perfect season is possible (1% chance) for Fremantle. They are most strongly favoured for 17 to 20 wins.
West Coast has calculated out to expect 5 to 9 wins, which means a few more losses at Subiaco are expected. Surely not part of the Eagles plans.


Other posts will cover the remaining teams, and a final post will pull all these charts together into our final ladder and number of wins predicted.
Posted by The FMI at 08:00