With the current discussions at AFL HQ around equalisation, and our recent excellent guest post on the AFL's struggles to apply an equalisation model, we thought it pertinent to delve a bit deeper at whathas happened, and update our chart sets that quantifies the effects of inequity inside the AFL.


The below chart was originally run in an earlier blog post (The New Football Arms Race), and prior to that it was on a precursor blog to this one.
We have refreshed that chart with the post 2013 season data, as per below.

The above distribution chart plots ever occurrence of a +60 point margin result in the VFL/AFL history, right back to 1897. The margins are further broken down into 20 point brackets (except for 140+ which covers all results over 140). 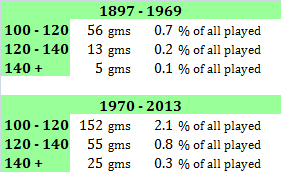 
"We should be worried about this."


A factor of games played?
It is fair to say that there was more football played week-on-week in those decades (138 games in the 70's, 185 games in the late 90s... compared to the 112 games of the 50's), but if we factor out that, by looking at the percentage of blowouts in the available season, the chart still shows a major increase in the same 1970's to 1990's period.

From this chart, you would have to say that the increase in the  number of 60+ point margin games has not been brought on by the increased frequency of games


The Equity Factor
Focusing on the last 40 years of football, there has never been such a sustained period of more than 1/3rd of the seasons games being over 10 goal results. In fact, prior to the 1970's, only one season breaches the 30% mark (1950). Other anomalies are 1919 (post war, when player numbers were reduced and all 8 teams returned to the field), and the turn of the previous century, when football was still very much a dalliance.

So, lets zoom in on those last 40 years and take a closer look at that period. We can firstly see a few key points...

This clearly highlights that the total scoring remained the same, but that some teams were dominating others in an unprecedented fashion.

It seems to us to be less than coincidental that the key driver for the boost in 60+ margin results was linked to the inequity that developed during the encroachment of full time professionalism, and the introduction of corporate sponsorship.

Significant money came into play in the early 70's. With that money came improved player payments, corporate sponsorship of teams, and on ground advertising.

Further, the introduction of the short lived '10 year rule' in the mid 70's was the beginning of free-ing up of player movement, and the precursor to today's "Free agency".

Also, the VFL players were also freed from the club shackles in the early 80 wit the introduction of the 'VFL Appeals Board'. Under this system, players who felt 'uncomfortable' at clubs but had their requests for transfer to other clubs could seek League assistance to leave (more detail on process here).
In part, this rule created many movements, including players exiting Richmond, the move of Kelvin Templeton to Melbourne from Footscray, and the mass signings at Sydney under the Edelsten regime.

With the increased cash available, and the lifting of some of the more draconian 'restraint of trade' issues players were bound by, the impetus for the cashed up clubs to build teams was available. And those with lesser resources were open for the plunder.


Other Mitigating Factors
Some other factors in play are the increases in physical strength or tactical nous that some teams had over others, or even that the increased attention to 'bowling green'-like playing surfaces has allowed for free-er scoring games.
These may be factors, but they are negated by the stability in the average points per game line, and also the reduction of incidents of 60+ point margins through the late 90's - 2000's.
We remain unconvinced of these as the key driver.


Arrested Escalation
All the above indicates to us at the FootyMaths Institute that if you have any form of financial inequity in the competition, then it becomes an imbalance battle between Haves and Have Nots.
But in that chart there is an indicator of how the competition can go forward.

The period from 1997 through to 2010 saw some semblance of on field competitiveness, characterised by only 9 games where the margin exceeded 120 points. The table below lists those games.

That's 9 games in 14 years, or less than 1 game per season at the extreme end of the unbalanced spectrum. 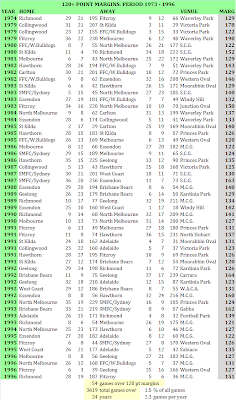 Consider that data against the previous years, as listed at right (click to expand).


What happened at club and administration level to turn around those figures to be a quarter (minimum) of what they were?

The salary cap and draft were employed (as early as 1986), and has been a major factor in  maintaining competitive balance*.
But perhaps the single biggest factor was the events around the latter half of 1996, where Fitzroy 'merged' with Brisbane Bears to form the Brisbane Lions, and where the league almost engineered another merger between Hawthorn and Melbourne.

The acrimony and ill feeling these events created left many feeling bitter about the way football was headed. The AFL then set a new position, that it would like to see the status-quo of teams and structures in place for the foreseeable future, and set about 'underwriting' (effectively) those clubs that struggled with finances (providing other criteria were met).

With the conditions of competition locked in to restrict power team from loading up on all the best talent (i.e. the salary cap), with the available talent pool spread through clubs as evenly as the draft and trading would allow, and with the introduction of financial surety, the 2000's saw the most competitive decade of football in its history (see these tables back in this post).

The difference between the 2000's and now?
Well the two new clubs are key contributors to the +60 point margin losses since 2011, as too are Melbourne and the crises they have endured (and Port Adelaide would scrape in as the fourth biggest contributor).
But also we have seen spending off-field increase dramatically over the last few years... trips to altitude training, hyperbaric chambers, the number of specialist coaches and medical support staff employed (and sometimes even outsourced).


As the discussion around 'competitive balance' continues, we believe a key point that must be enacted is a spending cap on football departments. For this is the area where the imbalance is currently derived.

As always we welcome your comments, but please provided some considered thought, not just a 'leave the game alone' rebuttal!

As we have written this companion piece to Sean's guest post, we have been joined in discussion on equalisation and competitive balance by the Troy Wheatley over at The Wooden Finger Depot, where he suggests another mathematical model to determine competitive balance.

We are yet to fully study this, but it seems to take season win/loss rates and compares them. While this seems a handy tool, losing close games and being 'torn a new one' are, we feel, very different measures. Competitive balance is more than just a teams ability to win, its also about how they compete on the day.

We will study this further for another blog post.
Posted by The FMI at 23:21