With the name 'Footscray' back in the VFL, and the re-birth of the Western/Whitten Oval as a regularly used competitive sporting venue, we thought it would be worth not only a #BackToSuburbanFooty Day event, but also a look back at the Western Oval in days past.

The below is part of a broader study to be posted at our sister blog, 'Cut Paw Paw Times', which focuses on the history of the inner western suburbs of Melbourne.


'Western Oval - A New Stand'
The Western Oval of 1929 had a few recognizable features that we in the 21st century will recognize... and yet so much is foreign. There is an amazingly detailed image of the ground from 1929 stored at the State Library of Victoria, which is too large to fully include in the blog. It is accessible by the link, but a lower resolution image is also here.

We are indebted to Daniel Charles Pratt (1892-1968) for recording this image (and many more), and giving us a window to our social and footballing heritage.

The Western Oval in 1929.
In that image, there is no Whitten Stand and no E.J. Smith Stand (which was on the outer / Gordon St side), as they were completed in 1968 and 1955 respectively. The John Gent Stand was only recently completed during the 1929 season, and was the possible reason for that photo being taken.

The Gent Stand construction can be seen in this picture below taken from the Boyles Football Photos Archive, which also lifted it from this video (at the 52.50 min mark).

Noted in that video was that the stands construction was delayed due to labour issues. With the film suggesting it was incomplete during football season, and the evidence of cricket pitches in place in the State Library photo, we could date that photo as post-1929 football season.
Back then, the stand was a pure seated area, with a gabled roof. Not the corporate boxed area in later life, nor the complete refurbishment to administration offices that it is today.


In 1929, completed (as before, possibly at the end of the season as there are cricket wickets ready), it looked like this.
Gone now in 2014 are the gabled roof and central clock tower,but the inlay design in the brickwork remains visible from the exterior.
Also gone are the row of trees behind the stand that extended the length of the western side of the ground.
And also gone are the row of houses behind the stands (you can just see their back yards, above). Both trees and houses have been replaced with a playground, car park, and child care centre.

For the generation brought up with regular football on television there are interesting points about the ground in 1929 that no longer exist.


For example, there was a covered area on the northern (Barkly St) end of the ground. In discussions with family members, this covered area known locally as 'the cowshed'. While small, it was none the less some degree of shelter from the wind and rain.

It stood on that northern end of the ground for quite a while, as there is a photo of it in place in 1945. Further, it existed in living memory, as we know of a few other people who recall it being there.
While incredibly rudimentary, it served to protect fans from wind and rain, and housed some serious drinkers too. The writers' own Grandfather once collected discarded beer bottles for returning to the brewers (for a handy sum) during the Depression. Not stubbies either, proper 750ml long necks.


Over in the Gordon St side, before the arrival of the E.J. Smith stand and the oddest coaches box in the league (well covered in this forum post at Austadiums.com), the outer was a sparse and barren place. Just a thin strip of embankment, without any terracing (as was the case with all the other standing room areas).
In the extreme left of the image above, there are the ticket gates leading into the ground... possibly only 2 or three points of access over on that end of the ground. The embankments are also visible as the gates have a cutting to allow fans access.

Along the rest of the outer, there are a few trees (possibly outside the ground), and no other facilities!!! Footy was a tough experience in those days, for the players as well as the fans.
Let me know if you spot any toilets!

As it happens, the modern day Gordon St side of the ground looks a lot like it did in 1929, as the return of the old stadium to a more 'community friendly' venue has turned the old E.J. Smith concrete and steel terrace back to a grassy embankment.


Down at the bottom right of the image is the Geelong Rd or Cross St or Railway End... Call it what you will.
The image misses a substantial part of this end of the ground, but does highlight a few interesting parts that are not there now.

a) The Fence
What is that fence leading from the boundary fence, back up toward Cross St? What purpose did it serve? It is an intriguing item that we will need to study further.

b) The Tennis Courts
The two tennis courts at this end of the ground show a remarkable incursion into the spectator area at the time. These would have limited capacity greatly, as well as restricted flow of patrons around the ground. 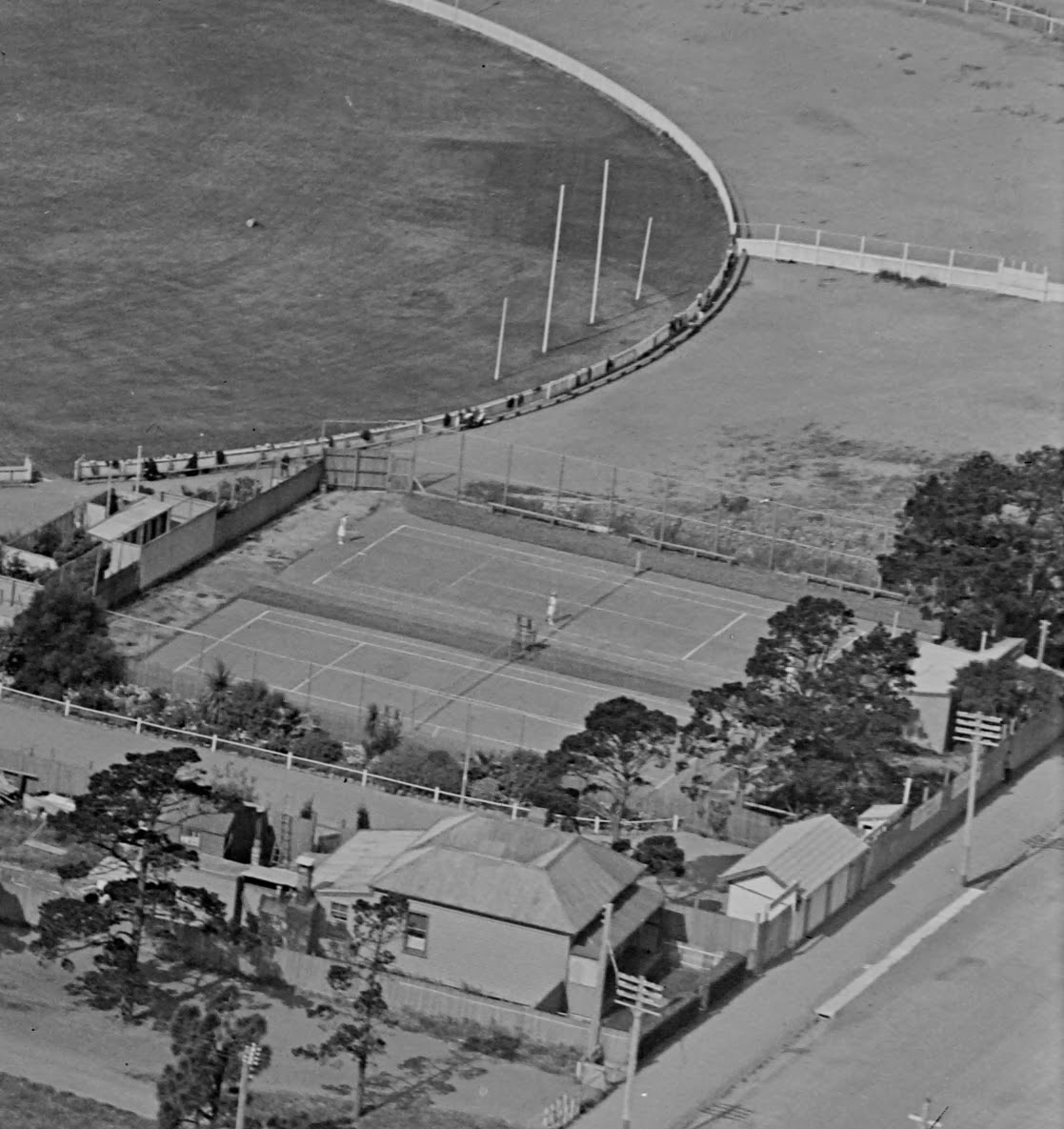 We know from other photos that they did not exist there in the 40's, and that there were other tennis courts at the Barkly St end in the 80's.

If you scroll back to the image at the top of the page, there is a field behind the Barkly St end goals (officially Spurling Reserve), which is where the tennis courts were relocated too.

c) The House
At the bottom of the photo above sits a house (with a very large backyard). We believe it was the groundskeepers house, with the yard serving to store the tools needed for ground upkeep. My father recalls his training sessions and competing in running events at the oval, in the mid 60's.
His running club had rooms behind that house and yard, and he would often meet an old 'Mr Matthews', who was there.

While yet to be confirmed, we believe that Mr David Reeves Matthews [PDF], the principle curator of Footscray Park, had at least some involvement at the Western Oval in the 60's, and may well have lived there as well (having left his previous residence in 1962).

Between the groundskeepers house and the tennis courts is a pathway that connected the spectator area to Cross St and West Footscray Station, marked at Cross St by a white hut containing a small set of entry gates. This was a main entry/exit point for that end of the ground right up until this century when the fences came down.

d) The Scoreboard
The original 1929 image does not cover the whole of the Cross St end, so it is inconclusive as to if there is any scoreboard at that end, as we remember from more recent seasons (along with the 'Olympic Tyres' clock.


For those wondering, the Footscray team of 1929 were as below, with some famous 'Scray names in that side. 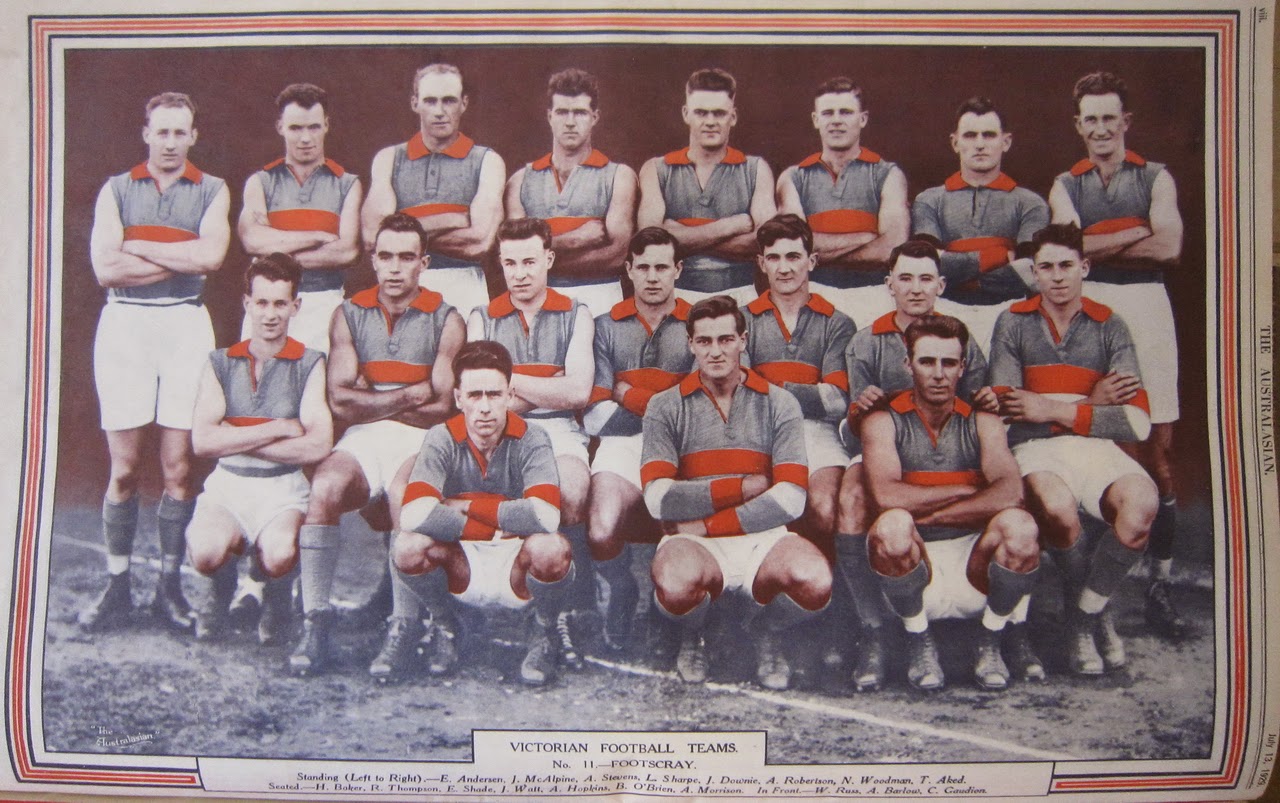 Not part of the 'Football area', but still very much a landmark of the Western Oval environs, the 'Drill Hall' on the Barkly St / Gordon St corner is also clearly visible in 1929. Built in the First World War era (sometime between 1911 and 1918 according to Heritage Victoria).
The Drill Hall was one of a number built in Melbourne at that time for preparing militia and armed forces.

Also outside the ground, and visible in the Gordon St side of the ground photo above is an imposing two story building on the corner of Gordon St and Geelong Rd. The same building still stands there today, and was home to Kings Funerals in days past.

The backyard of Kings was also co-opted by the club and Channel 9 for the first 'E.J. Whitten Legends game. As the Western Oval had no television-standard floodlighting, a crane was parked in their backyard, and floodlights were suspended from the top!

The Geelong Rd is also visible, with its wide roadway reservation (3 chains wide ... 3 cricket pitch lengths!!). In 1929 it was very different to today, with only a rather narrow single lane carriageway through the middle.

As before, we intend to add more to this, and post it over at at our sister blog 'Cut Paw Paw Times'. Will let you all know when it is up, so you can learn some of the history of a ground come back to life, on 5 April 2014.
Posted by The FMI at 23:26