Yet another challenge for the AFL faces (along with equalisation, integrity, health and safety issues, football's gender imbalance and racial discrimination) is to find an appropriate successor to Andrew Demetriou.
Last month Jake Niall wrote this, which sums up the need and problem quite well.

Demetriou has continued a successful AFL tradition for focusing on the end - what he saw as the long-term interests of the game - rather than the means. Whether by carrot, stick or brick, he mostly got his way. But fairly or not, the Melbourne tanking and Essendon fiasco mean there's more scrutiny of how the league gets its desired outcome.

Now, the man anointed by most gets a fair mention in that Niall piece, and it is entirely likely he will collect the corner office by seasons end.

But given the issues around the whole Essendon drugs saga, of negotiated settlements, peacemakers and leaks of information from the associated a cast of thousands, you would wonder why a person "who is a renowned deal-maker" is in the frame as candidate number 1.

If the AFL is to properly address some of the biggest issues it faces, such as some of those listed above., and new issues such as media rights, then it should look to a future CEO who does not bring the baggage of the past with them.

And they should look to a leader who can detail ambitious goals, prepare and empower staff to work toward them, then run that steady course toward achieving them.

We see the biggest challenge now as equalisation and ensuring balance in the competition such that any team has the opportunity for success. Niall writes also...


A senior official from one club said the major challenge for the next man would be to ensure that the likes of Melbourne, St Kilda, the Dogs and North Melbourne were financially self-sufficient.
The expansion teams, and perhaps Brisbane, are a long way from weaning themselves off the AFL teat, but the bottomless pit needed for Gold Coast and especially the Giants will impose limits on what the AFL can dole out to the old clubs; this is one reason why the league is seeking to slug the rich. The billion-plus TV rights aren't enough - it needs the cash for expansion and equalisation.


If Niall is right, and we are headed for a  "a period of ''consolidation'' in the next few years" then lets hope the house-keeping around 'balance' gets priority over the scandals of the last few years.
And that balance is not just financial, but also opportunity to grow brands that are suffocated by gerrymandered fixtures and hand-outs of prime TV slots to a select few.
And about the balance of genders in the football boardrooms, and the balance of striving to achieve in sport without tearing at the fabric of football.

Even in a period of consolidation, the CEO still needs to be an agent of change, a journey agent that can steer the AFL towards a just system for all players, teams and fans.

For what it is worth, our 'on the record' selection for next CEO* would be the gentleman at right, who has dragged up his club from the doldrums and reformed it into a very professional outfit.


*Assuming of course OUR OWN TILT does not win us the job!


Dear @AFL. With the departure of Andrew Demetriou as CEO, I would like to formally apply for the role of AFL CEO. (1/4) #AFLCEOApplication
— FootyMaths Institute (@Footy_Maths) March 4, 2014


> I already have ideas to bring to the @AFL Commission's attention, which will ensure the vibrancy of competition. (2/4) #AFLCEOApplication
— FootyMaths Institute (@Footy_Maths) March 4, 2014

Another week of missed opportunities from our algorithms... Of course the Gold Coast would beat Brisbane, as they are a big rising star of the competition this year.
Otherwise, 6 from 9 is middling, but not acceptable.
Pretty happy to have scored perfect on Geelong though!

Our Mezzoculo Index also threw up Port, Fremantle and Adelaide as possible winners against the tip... thankfully they didn't rise to the occasion!. We also suggested that the GWS could better the 3 point predicted margin... one right there for the M.I. (1 from 4!!) 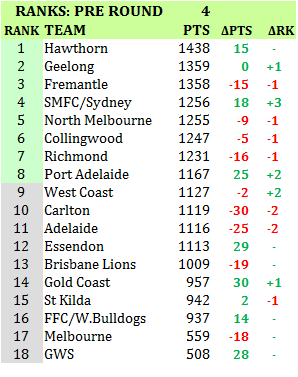 Big changes on the ladder this week... far to many to describe, but highlights are


- Geelong perform exactly as we expected, so neither gain nor lose points, and rise to 2nd after Fremantle fall.

- Sydney rise 3 places after defeating Adelaide, as all three above them drop points (North by not winning as well as expected).

- Port Adelaide break into our top 8 on the back of a better than expected loss (if that makes sense), AND because both Adelaide and Carlton had shockers.

- The Gold Coast move up into 14th, overtaking St Kilda. This is the highest they have been since introduction.


Worth watching over the coming weeks in our rankings (and others, such as Troy Wheatley's) will be how far up the Gold Coast can climb, and if the GWS can wrest itself clear of the bottom (look out Melbourne!!)
Posted by The FMI at 13:20