Reading the press as we do, we cant help but note that there are a lot of column inches devoted to the rich power brokers wheeling and whirring away behind the scenes at Carlton. Examples....

Bruce Mathieson may be a billionaire pokies king and a Carlton powerbroker, but Carlton president Stephen Kernahan and captain Marc Murphy made it clear on Monday they were tired of his criticism of the club.

But the truth is that the board requires a radical cull, not unlike Carlton’s list. External forces have not ruled out challenging towards the end of the season with famous Carlton names such as Tom Elliott and Fraser Brown among those who could be part of a push for a total spill of positions.

If, as Caroline Wilson says, a former wealthy President's son (who himself is nicely set up, thank you very much) is the answer to battling backroom battles between Blues benefactors, then Carlton could consider themselves cruising into continued crises.

Elliot Senior with Kernahan (via TheAge), and Elliot Junior (via Carlton FC)


The structures in place in the era of the past Elliot administration have changed to that considered 'socialist' but some in the football industry. The application of 'money' to a football clubs problems is no longer the answer. Caps and drafts have put an end to buying success.
We wonder if that is known well by the big-wigs inside 'Bunker Blues'.

That said, Tom is his own man, and has created his own businesses as well as volunteered time for community radio in Melbourne. If he is cut from different cloth, it might be good move for football.

PS... Kill me now for that ridiculous use of alliteration above.

Always good to get 7 from 9 tips correct, but geez those margins are killers! 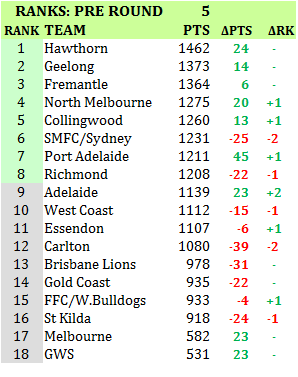 All the weekends results also created turmoil in our rankings table.
Eleven changes this week is the most we have seen, and the average movement is also unusually high.

Port Adelaide scored a record high change of +45 to move into 7th, while the biggest drop was via Carlton (-39) which sends them down to 12th.

Fourth to Eighth are bunched tightly with only 67 points separating 5 teams.