Rumblings:
There have been numerous articles and discussions about 'variable pricing'. Mostly around the cost imposition, and little discussion around the raw Economics 101 that it is based on, nor the reason why it was brought in.

The best analysis to date is by Anthony Costa (@costasports) over at Sports Business Insider.

Has the AFL priced fans out of a day at the footy? Surprisingly, the average home and away crowd this year is up 4% on last year’s total.

That’s not to say that the AFL has got its Etihad and MCG pricing right. You don’t price to create friction with your customers. Price tags are a call to action, not an argument.

Cost of living pressures are real, particularly for families on limited incomes. But how much a person is willing to pay to attend an event depends as much on what’s in their head as what’s in their wallet. Just because something’s expensive doesn’t mean there’s no demand for it. Likewise, a flood of cheap tickets won’t necessarily make people more interested in coming to games.

Unlike a lot of the other commentary about the place, Anthony's is a balanced approach, without railing against a 'big brother', but providing comparisions and contrasts.


Melbourne's footballing culture was traditionally based around a 'walk-up gate'. If you wanted to see football, you just turned up and paid.
The shift to 'memberships' as been profound in the last 40 years, with growth in some cases almost 10 fold. And while membership entitles you to 'access and a seat' it is always "subject to availability".

What Anthony's piece does highlight well, is the one truth about the installation of variable pricing... that it has been badly handled by the AFL.


Discontent:
It has been a while since 'The Thing#' decided it was time for James to ask his family and team to shut up about how they have been railroaded out of the AFL.
Suspicions were raised at the time that the Hird dynasty was about to end, given the public stance taken attacking the AFL when the club was working  hard to build bridges.  (#Only having fun Mr Little!) 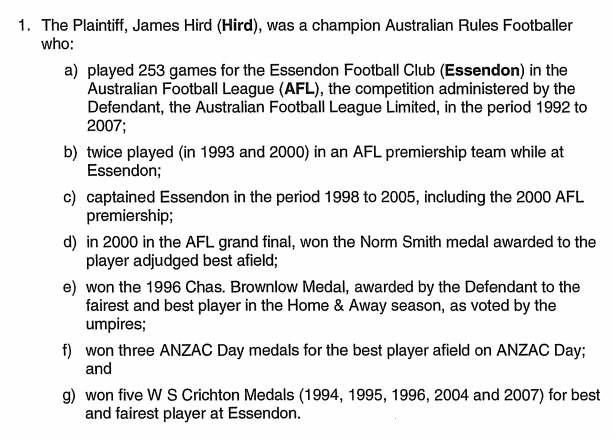 And given the statements in the Supreme Court writ [PDF], it is almost no surprise to hear what Matthew Lloyd had to say on 3AW on the weekend.

It is one thing for the club to make an error on listing, but another to accept payment while your Premiership comrades get bumped.

And that Lloyd went public with this... well, is it a sign of more discontent between Hird and Essendon?


THE RESULTS:
After a disappointing weekend last week, it was good to bank a good one this weekend.

Seven from nine games tipped correct was a good effort, but even better was the margins in five of them:
Three games tipped within a goal (Collingwood -4, Brisbane -1, and Adelaide +1), and two more tipped within 13 points (Gold Coast +13, and Carlton +8). 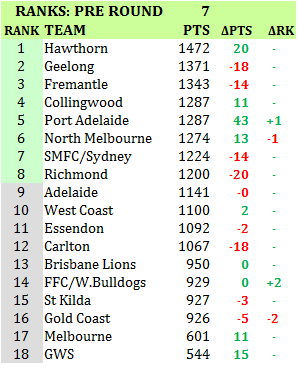 And we were one of only three public tipsters to tip Brisbane for the Wellington win.

On the table, Port continue to rise, and that brilliant victory over Geelong has them on the cusp of being ranked 4th.

Richmond are saved a fall from the 8 by the 800-odd point buffer between them and Adelaide, but overall have slumped about 60 points in 6 games.

At the bottom, St. Kilda did marginally worse than we expected, so lost 3 points, the Bulldogs also marginally better so collect decimal placings of points, and the Suns won by less than expected and lost 5 points.
All these fine adjustments cost the Suns 14th spot, which was handed to the Bulldogs.
Posted by The FMI at 16:57