We at The FootyMaths Institute love to have guest posters contributing to our site. A fresh pair of eyes and minds constructed differently create different windows to view AFL and its business through.
Our fifth Guest Post, written by another new writer, focuses on fans of Australian Football.

Today's guest writer is Sean Lawson (@arwon), Canberra resident and Sydney Swans fan, who also covers more sport topics at his twitter account than should be legally allowed.
Sean also is able to wield technology for good instead of evil, and has used that power to drill into the recently released 'Google Trend' data for Australian Football teams. Using search terms as a metric, he has been able to determine the 'popularity' of AFL clubs, and their fan-base distribution.
Sean also has more information to come from this investigation, so another guest post from him is in the works.
---


AFL teams popularity according to Google Trends
Last week Fivethirtyeight had a post on sports fandom in major sporting leagues as obtained from Google Trends, using it as a decent proxy for how much interest and popularity sporting teams have. Naturally I have applied this to the AFL, measured equality of fandom size like them, and also dug a little deeper.

Google Trends now organises searches by topic. Topic search can, for example, mostly distinguish searches for Paul Collingwood and Collingwood, Ontario from the Collingwood Football Club. That process isn't perfect, but with a couple of tweaks, we can get to a pretty good view of how popular a search topic each team has been since 2004.


A few words on the data
I've modified the exported Google Trends result to only count Australian hits. This is because for a few clubs, foreign searches for unrelated topics are clearly skewing things in spite of the "topics" algorithm filtering a lot of the false positives. Collingwood got a lot of searches from Canada, for instance, and Fremantle from the Netherlands (go figure). Sydney, Hawthorn, Geelong and North Melbourne also got over foreign hits equal to over 10% of their Australian total.

The two worst affected teams were GWS and Carlton. GWS as a topic is new compared to the 10 years of Trends data, and is completely swamped by the cumulative hits from Austria,  Germany and others. Indeed, Graz is the top city for searches for GWS. This may have identified a secret Alpine hotspot of people who know the words to Big Big Sound but it's more likely the searches are for the real estate company called GWS, which even uses a similar logo.

Carlton's foreign searches were also a very high 46% of their total Australian searches, indicating that the word "Carlton" is very widespread and Trends can't quite sift it out. Still, given that the word "carlton" as a pure search term dwarfs searches for the club by a ratio of about 33:1, the algorithm's done alright:

Fandom equality in the AFL
Before I show the main chart, I've also, like Fivethirtyeight, calculated the Gini coefficient for fandom of different teams across the league. Gini coefficients are a measure of inequality in a set of data, usually used for income distribution within countries. The higher the number, the greater the inequality. 1.00 would mean one person (or in this case club) had all the money (supporters).

By world standards a Gini of 0.23, about that of Sweden, is telling us the AFL remains a very equal league in terms of support. However, the NRL appears to be substantially more equal, coming even closer to perfect equality than the AFL. Appending Fivethirtyeight's table gives us the following:

Now here's the main chart
Adjusting for foreign hits, what we actually have is Google searches for the topic of each football club in Australia. 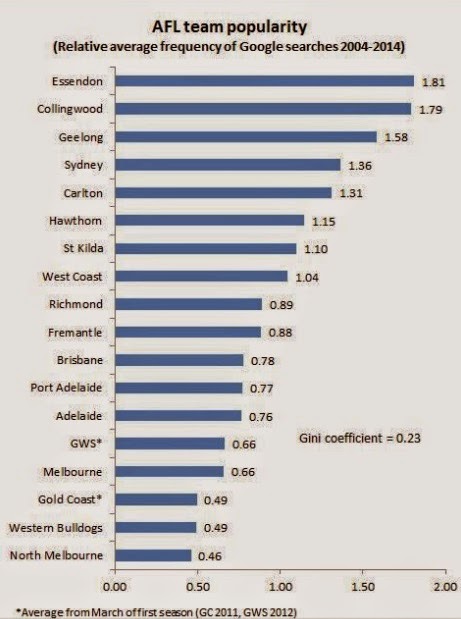 The big thing that should jump out is that we appear to have found a measure which doesn't have Collingwood as top dog in term of club size (Collingwood do show slightly larger in the unedited Trends topic search, but this is influenced by Collingwood's false positives from Canada and the UK).

Have the Bombers dethroned Collingwood as the most popular club in the league? Are St Kilda really more popular than West Coast? Port Adelaide bigger than the Crows?

Perhaps not. Some people might remember Essendon has been in the news a bit lately for reasons other than football. It will also be noted that St Kilda have occasionally done likewise.
Here's where the time series comes in handy:

Note the biggest spike for West Coast in September 2005 and then September 2006. Collingwood is in September 2010 and 2011. There's a smaller spike for St Kilda in both 2009 and 2010, reflecting their lower popularity. All this is pretty typical - peak search frequency occurs normally when a club is in finals and especially a grand final.

But then, St Kilda get a second spike in December 2010 which coincides with some of the Saints' most newsworthy off-field dramas. (Incidentally, we seem to have identified that setting a dwarf on fire doesn't really compare to the "St Kilda Schoolgirl" stories in terms of notoriety)

And of course there's that huge red spike for Essendon, and an abnormally high search volume for Essendon throughout 2013.
If one removes 2013, Collingwood goes back to being the most popular club.

To sum up, we have identified two important contributors to "apparent popularity" - deep runs into the finals, and off-field newsworthiness. This also explains Port vs the Crows, with the cumulative search impact of their two grand finals in 2004 and 2007, and John McCarthy's tragic death in 2012, putting their long term average slightly above instead of slightly below the Crows


Geographical distribution
Next, let's have a look at where clubs are getting their interest from. Are Collingwood really a nationally followed club? Does anyone outside of Geelong care about the Cats? And just who is interested in the expansion clubs?

First, let's look at the Melbourne clubs. Note that I couldn't get any Hobart or Launceston data to show up so Tasmania remains, regrettably, a mystery. 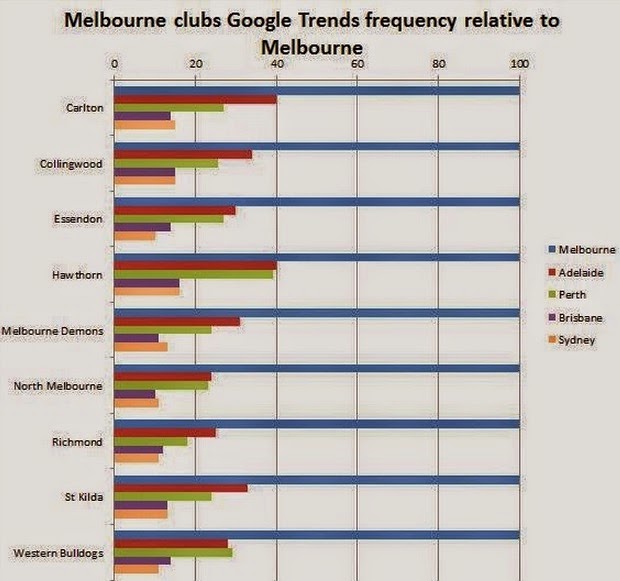 These clubs all, predictably, get most of their interest in Melbourne. There's no particularly strong evidence anyone is getting a lot more relative interest in the rest of the country.

One item of note is the greater interest in Adelaide than Perth for nearly every Victorian team, despite it being a smaller city. It's not due to the exclusion of Fremantle, as that doesn't show up as a separate city in Google's data.
Are we identifying that there's more rugby people and foreigners in Perth? Are the fans over there just more self-obsessed and focused just on Freo and West Coast?

One other thing this data tends to suggest is that the anecdotal evidence of an outsized North Melbourne fan base in Perth may be true. We also may have identified that Hawthorn has an outsized Perth and Adelaide fanbase, perhaps due to their success in the earlier TV era. Or alternatively, perhaps this is because Hawthorn is the name of a suburb in Perth and Adelaide, and Google's algorithm isn't perfect. 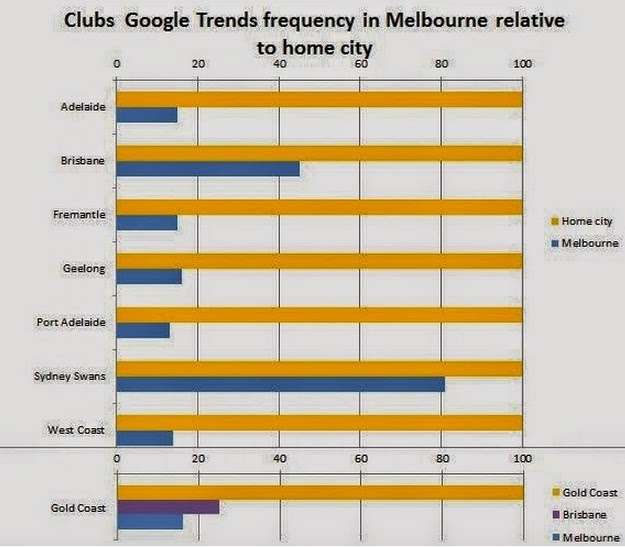 Geelong, in terms of distribution of interest, look a lot like an interstate team from a traditional football market. Interest in their home city dwarfs that in Melbourne. This surprised me as I figured they had a Melbourne support base. It's not just an artefact of false positives with other Geelong topics, because the same pattern is there for the specific search string "geelong cats".

Sydney, by contrast, get nearly as much search interest in Melbourne as Sydney, and the Lions get more than a southern state team as well. I think it must reflect greater numbers of fans in Melbourne, both traditional Fitzroy and South Melbourne fans and presumably transplanted Sydneysiders and Brisbanites who picked the team from their home city.

I've left GWS off the above because they'd break the neat graphs above:

GWS data is messy because of the aforementioned Austrian bleed-through, which means I couldn't pull out most Australian cities without reducing it to just the last 12 months. Regardless, the picture is clear.

Relative to their "home" Sydney market, GWS are getting more Google searches in not only Melbourne, but also Canberra and Adelaide. Canberra is sort of understandable since it's a secondary market and a more developed Aussie Rules culture, but on the other hand it’s a city of 350,000 vs a city of 4.5 million. These are still worrying trends for the Giants' ability to get some support at home.

This post has already gotten a bit long, so a second post is in preparation now which will look at other measures of club size such as membership, revenue, attendances, social media presence, and Roy Morgan survey data.
Hopefully we'll see to see to what extent the interest indicated by Google trends is translated into more concrete things, and who could be said to be over- and under-performing.
Posted by The FMI at 17:53