The second part in Sean Lawson' series on AFL fandom, support, fan bases and membership. This post looks deeper at 'soft' and 'hard' support, and how one translates into another.

Sean (@arwon) is a Canberra resident and Sydney Swans fan, but we consider him a good boke all the same. He also has a latent interest in Port Adelaide, as well as Rugby and Association Football.
Sean once again used his technological and statistical prowess to dig further into supporter data for this second of two guest posts. And its a beauty.
---


Digging deeper into AFL club support data
In my last post I took a look at what Google Trends search volumes told us about the interest level of Australians in each AFL team.

Internet search interest is obviously a pretty soft measure of support, since Googling a club doesn't exactly help that club with its bottom line. By contrast, the most traditional measures are things like attendances and memberships. They're very relevant to clubs, because paying members and crowds are how they make revenue, and they represent the most engaged and committed fans.
They're not, however, the full picture of a club's weight within the league. Clubs, sponsors, and the league, want to convert softer interest into money and eyeballs.

In this post, I'm going look at a number of other measures of interest level in footy teams. My basic thesis is that the other, much softer, measures (such as Google Trends search volumes) represent a "potential" or "latent" fan base and form part of the picture of overall club support. They're something sponsors are interested in as a measure of potential reach, and they're something clubs want to know so they can convert casual interest into the more active support they crave.

Let's get straight into table showing all the measures I’m looking at in this analysis along with the Google Trends stuff: 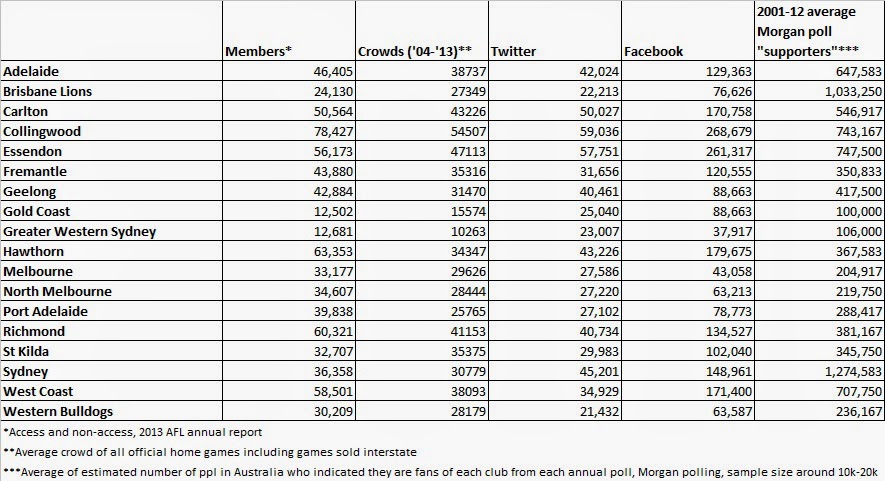 WTF Morgan? 1.2 million Swans fans?
The other measures are pretty self-explanatory, but I’ll just have a few words on the Morgan Poll data because it’s counter-intuitive until you think about it.

I like this because it’s the absolute softest measure possible of club “support”. It’s an annual, nationwide demographically-weighted poll asking simply “do you support an AFL team?” and recording the responses as a national estimate. It’s basically the same technique which gives us political opinion polls. They’ve got about twelve years worth of data so we can get a nice long-run average smoothing out bandwagon effects and any MoE issues.

Nationwide surveys, of course, create huge estimates for Sydney and Brisbane – as they should – since those clubs sit in a huge population centre that’s mostly disinterested but who, nonetheless, feel at least the vaguest of partiality towards their local team. For clubs, for sponsors, for media companies, for the league, that very latent support is an important target.


“Hard” and “soft” support
Now here is the same data from the table above, converted to league relativities and compared to the Google Trends data from my last post. From this we can start to get a sense of who is over- and under- performing relative to latent interest: 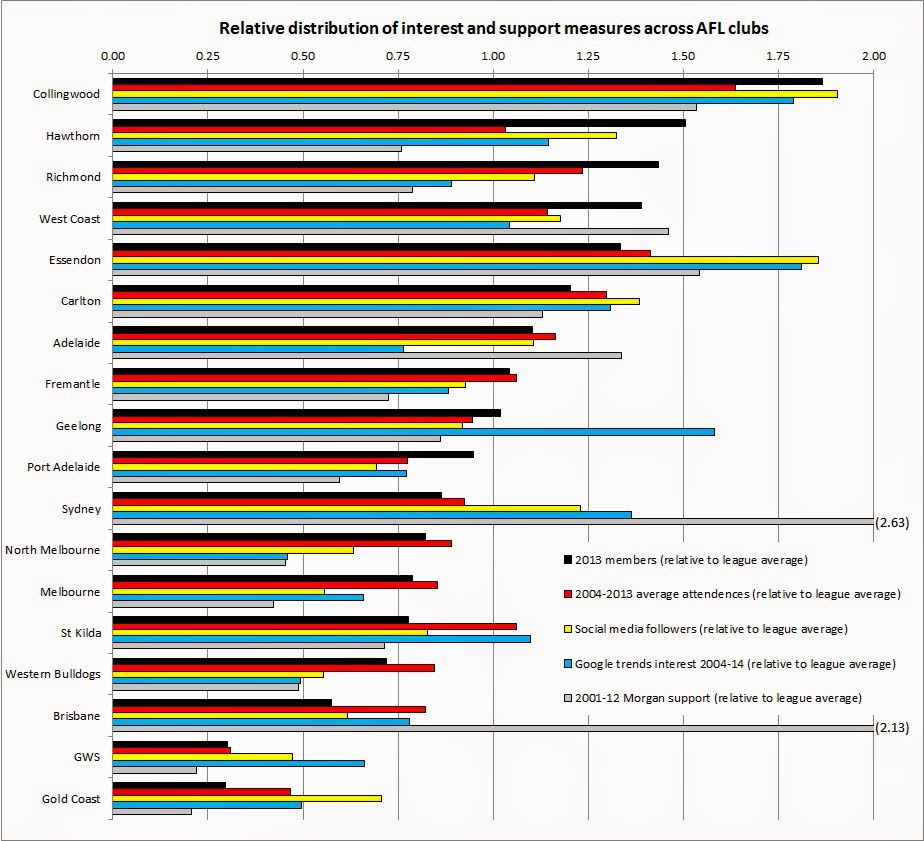 I’ve sorted by number of members, then with each measure listed in descending order of firmness of support. The logic here is that in terms of strength of support:

We could visualise this model like a pyramid, with hardcore support at the top and clubs wanting to shift people towards the top of the pyramid (as per right) 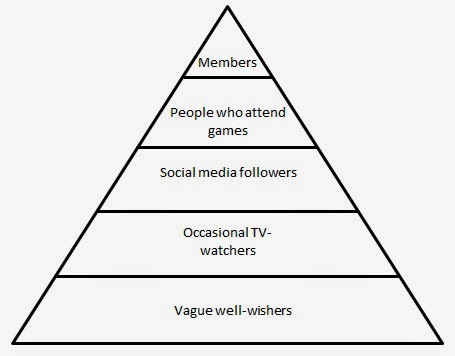 Another way to look at this data is with a scatter plot.
I’ve grouped the above measures into “hard” and “soft” measures of support (attendances and memberships versus google trends, social media and Roy Morgan poll responses) and we can present those averages as a scatter plot, as below. 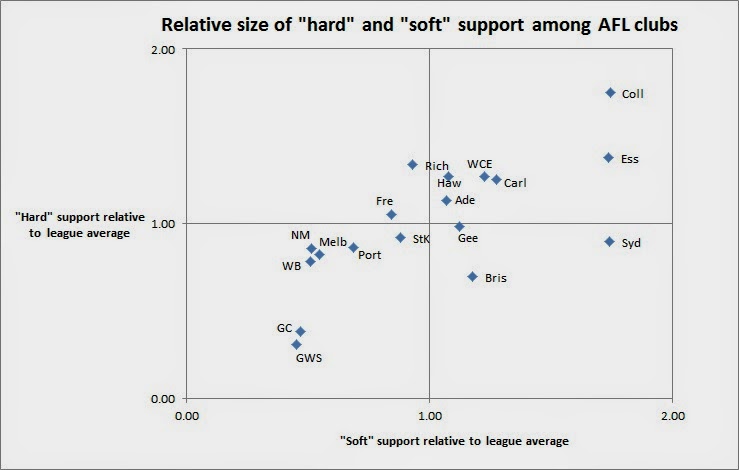 Fat and skinny pyramids
There are clear trends here. Most obviously, Brisbane and especially Sydney have absolutely massive “latent” support. By the softest measure, a million people (or roughly half of Brisbane and a quarter of Sydney) consider themselves to support those teams. But the two clubs only convert a small fraction of that into money. Sydney looks like a theoretical heavyweight, but still gets below the league average for crowds and memberships.

By contrast to all this, Hawthorn have been superb at converting a relatively the small potential fan base of under 400k nation-wide shown in Morgan’s polling, into a hefty membership base and decent crowds (remembering Launceston affects their home averages). Richmond looks like they may be charting a similar path.

Going back to the pyramid model, Sydney and Hawthorn could be said to look something like this:

This all illustrates the structural difficulties the Lions and Swans have had in turning that huge spread of potential support into more active engagement.
With a much lower apparent base than the Lions and Swans, where will GWS and Gold Coast find their own support to turn into members and bums on seats?

Softness of northern State support looms as a serious challenge to the expansion clubs’ long-term viability. Perhaps, on the other hand, we can look to established “little brother” clubs Port Adelaide and Fremantle and their greater conversion of latent support into memberships and crowds as a source of optimism. The Suns and Giants may yet be able to find modest but sustainable niches, even if a million people still say they back the other guys but never do anything about it.
(That is, if the Giants can start generating some interest within Sydney itself.)


Essendon vs Collingwood
Essendon vs Collingwood is also an interesting one. Collingwood have, so far, done better transforming a huge base into members and crowds. But on these measures, the potential is there for the Bombers to catch them.
Google Trends, Morgan and social media all indicate a support base roughly equal to Collingwood’s (even given our previous post’s proviso about Essendon’s recent notoriety and Google Trends data). Perhaps only the Pies’ recent period of success has kept them ahead of their ANZAC rivals in terms of crowds and members.


Whither the small clubs?
We then have a cluster of Victorian teams who have struggled to expand their reach and support. North, the Bulldogs and Melbourne rate a lot closer to league average on hard measures of membership and crowd than they do on any softer measures of interest. This indicates a loyal core of followers but unfortunately for them may reflect a low ceiling for expanding their support. It’s also a strong counterargument against the self-interested agendas of people like Eddie Maguire who seem to argue all clubs can become big like Collingwood.

Hawthorn may present a model to change the destinies of these small Victorian clubs, but one wonders whether long-term sustained success is the only method for breaking out of this group. In the draft era, is it possible for smaller clubs to maintain a sustained level of success over decades (or even generations), to be able to convert that success into latent support and then to membership, crowd and revenue growth? Probably not.

North Melbourne, St Kilda, and the Bulldogs have all had periods of recent success, but are seemingly yet to convert that into any membership, crowd or financial growth of significance. It is recent success, but not the type of sustained success that Hawthorn have had, of premierships in every decade since the 60's.

As Geelong's submission to the AFL on equalisation [PDF] put it:


"There is little evidence that the relative size of supporter bases has moved much between clubs over the last 50 years. A few clubs may have lost a little ground after decades of poor performance and arguably only one club has gained due to a level of sustained on-field success 30 years ago that cannot be repeated."


The consequences for expansion and equalisation, then, are that a model must be found which basically accepts that the smaller clubs are smaller in terms of membership, revenue and support for long-term and structural reasons. Collingwood aren't big and powerful because Eddie Maguire is a clever businessman. They're big because they've always been big.

What can change structural relative support levels? Probably only capturing new markets. That's the logic behind Hawthorn in Tasmania and others elsewhere and it's sound, but only to a limited extent - clubs can only play so much in a new market without neglecting and alienating their existing fans.

The whinging from the "big clubs" about "punishing success" and "unfair taxation" are entirely baseless, smug, self-serving and wrong. Equalisation between big and small clubs is a necessary and permanent fact of the AFL due to the structure of support bases and how those translate into resources for each club.


And finally...
Finally, here’s a chart I find interesting but I don’t know what it means. Clubs appear to have different Facebook and Twitter distributions. Geelong fans and Dees fans love Twitter, Pies and Eagles fans seem to prefer Facebook. Mysterious. 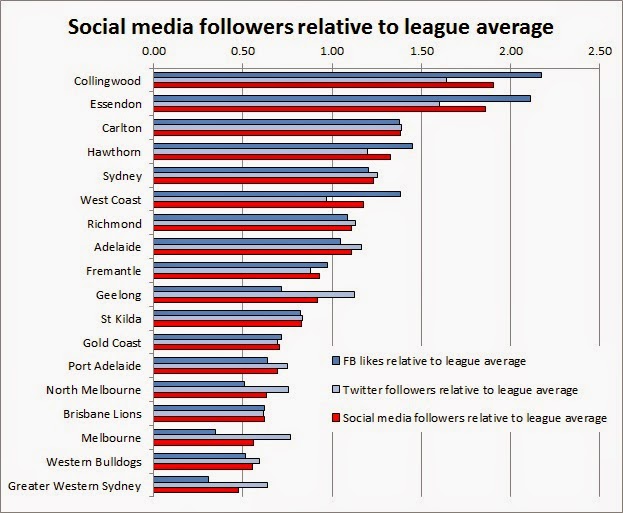