We expect our loyal reader will know that during the Second World War, places such as the M.C.G. were commandeered for use by the armed forces. At the M.C.G., thousands of U.S. troops were stationed at what was un-officially called 'Camp Murphy'.

Similarly, the Western Oval was used as a military asset in 1942, forcing Footscray to play its 7 home games  (for a 5 and 2 record) at the Yarraville Oval for that season.

1939
In our earlier blog post about the Western Oval in 1929, we were able to note some differences to the current (or even recent) layout of the Western Oval and surrounds.
By 1939, there were already changes to the ground that took away a few eccentricities, as the photo below shows.

While the above photo only manages to sneak the football ground into the bottom of frame, we can see that the tennis courts at the Geelong Road end have been moved on. We suspect they were moved to the Barkly St end (as it is known there were tennis courts in Spurling Reserve until recently), but this image does not make that very clear.

1945
After the war, aerial photos of Melbourne were taken, and these are now stored electronically. Dr. Stephen Downes alerted us to that online service (hosted by the University of Melbourne Library), and from those huge images, we could locate the Western Oval as per the image below.

The full size 1945 aerial image that covers the Western Oval is here (and its a big image), so the cropped down version above is better for inclusion to the blog.

This picture gives us a better view of the ground, and confirms the Geelong Rd end is free of the tennis court intrusion to the spectator area. It is possible, but not conclusive, that tennis courts have been laid in the Barkly St end of the ground. There even appears to be a white building placed to the right of the courts, possibly club rooms or changing rooms. 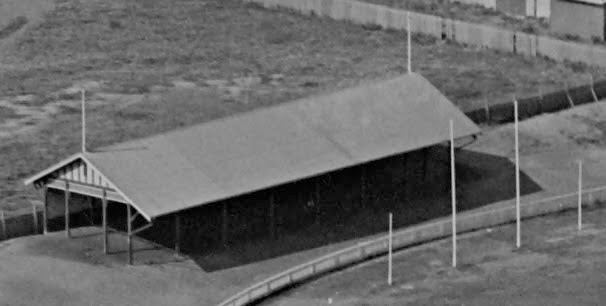 Also at the Barky St end sits a long narrow rectangle with a shadow effect to it.
This is our old friend, 'the cowshed', still holding court for fans on the northern end of the ground.


Also of note is the white rectangle sited just to the south of the John Gent Stand.
As mentioned in the Western Oval - 1929 blog post, this is the club rooms for various sports clubs (like the Footscray Harriers) that shared the Western Ovals facilities, as well as the Footscray Past-Players Association rooms.
Posted by The FMI at 16:35