A final YouTube video worth sharing as we complete our build up to the return of  'Footscray' to the VFL.
Your correspondent, while not a Footscray supporter or member, was present at this game and still recalls the critical moment deep into time on. The good natured banter in the outer, that came from hardy souls that endured not just the shocking weather, and also the odd - almost surreal - game of football that was unfolding that day.


'The Last 35 Seconds'
It seemed to rain all day. That very Melbourne winter rain. Not great loads that you get in northern states, but that consistent rain that just drifts down for hours.
You can see it in the footage, of the soaked centre wicket area, with pools of water lying on the mud.
And in the footsteps of players on the grass, where water splashes up from the lush green carpet suggesting just how sodden it was.

On that wet wet Western Oval day in 1991, the Bulldogs went within a whisker of sending home a team goalless.
Carlton were all at sea that day, and although a good first quarter effort was noted, they just could not handle the wet conditions. 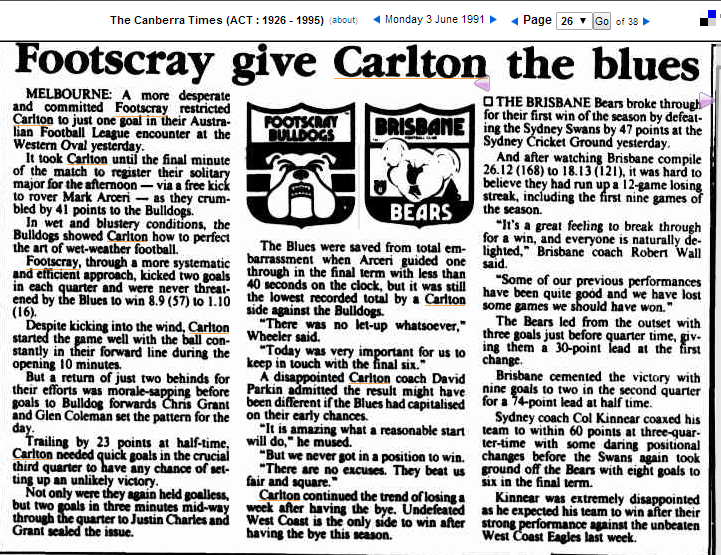 The Footscray Football club in 1991 was only into its second season free from the threat of mergers.
With Terry Wheeler at the helm, they returned a 12-10 win-loss season in 1990 to miss the finals.

In 1991, they stumbled early, but regained a degree of form to enter the match at 4 wins - 5 losses.

Carlton were also non-finalists in 1990, and started the 91 season with early wins. Entering this match they were 4 - 4, and coming off the bye.

Both teams had quality players, including Brownlow Medalists,


Again, this one footballing day made the top 10 Whitten Oval Moments. The video below is only a five minute or so highlight package, but it is worth it to;


- see the conditions the players were subjected too,
- hear Superboot Bernie Quinlan enjoying the moment at the expense of former Carlton player Ian Robertson, and
- well... just enjoy seeing Carlton cop a drubbing that the football world should never forget!