We are finally done with the bye rounds for 2014. May they be the last for eternity.

There was also a small preamble here, that as was being written just got added to and added to, until it became a blog post all of itself.
Best to set to free, independent of this post.

Please read 'We Are All Diminished' here.


RESULTS:
Another 'burger' opportunity lost with 5 from 6 this week - Oh Hawthorn, why have you forsaken my stomach! 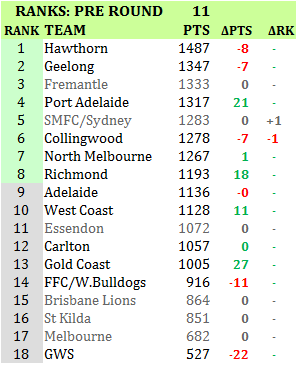 Happy to have scored a few close margin tips this weekend.. an exact tip on Carlton and a 1 point miss on Geelong.

Over on the table, the last of three weeks of monimal change is gone.

Courtesy, again as it was last week of Collingwood doing worse than expected, a team that had the bye improves its position.

Sydney into 5th as the Pies slide again. Differences here are all small though, so volatility is the outcome for 2nd down to 7th...

Also, of note - the Gold Coast breach the 1000pt barrier for the first time since they entered the AFL. Now tracking at just over parity.
The Suns are now a fully fledged AFL team, without doubt.
But is the success of the Suns, as the Bulldog Tragician suggests, not


"a noble, heartwarming story to be admired and celebrated; it's simply what you'd reasonably expect from the advantages they've been granted. Their inevitable success should be seen as a return on investment, not a fairytale."

A 'return on investment' is a brilliant term for success in the modern franchise-football world of 2014.
Posted by The FMI at 09:28