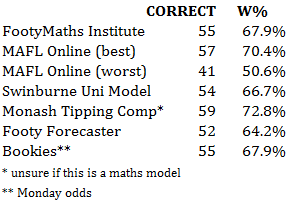 By the table at right, we are again 'in the mix' with the other models, and on par with the bookies... not a bad result.

It just looks bad when you see a tipped correct ratio of under 70%...!! But at least we are all having such down years.

Proof it is a tough season to pick.

Reasons why...? Well the rise of the Suns and Port would have most maths methods caught out. And also the fall of Richmond would be a factor too.


THE TIPS:
Back to a whole 9 gane round this week, and a big chance for 2 blow-outs.

We have the computer telling us Hawthorn will destroy GWS, and at Treager Park (hello, Alice Springs), Port should win by about 10 goals.
North Melbourne have been tipped as the close one, with 2 points the expected margin away at West Coast.

Worth mentioning too that Treager Park becomes venue number 44 used by the VFL/AFL, as it hosts its first game this weekend.
It joins an elite list of other single game venues:

MEZZOCULO INDEX:
A full board of blobs n the board, and we see that our calculations have Melbourne as the team that has performed above expectations more than other over the last 5 rounds.

At the other end, Brisbane and St Kilda are out of touch.

In reading the Index above we can 'scape our tipping goats' by suggesting...


- Melbourne might avoid a +60 point blow out... maybe.
- Collingwood could go +60 over St Kilda.
- Carton should produce a better return than 8 points over Brisbane.
- The Suns are outside chances to go against our tip and win.
- Sydney could defeat Geelong by more than the tip.