Adelaide and Port Adelaide spent a fair bit of the pre-season 'talking-up' how great it was to be playing at their new home, The Adelaide Oval.
The Crows in particular were bragging hardest, dubbing the venue 'The Adelaide Crowval'.

After 6 rounds, here are the results to date:


Not a bad record for the towns 'little brother' team.

Adding in the Port Adelaide home game, the Crows record at the self-appointed 'Crowval' is less than impressive.

THE RESULTS:
Another steady tipping week with 7 from 9 the return. 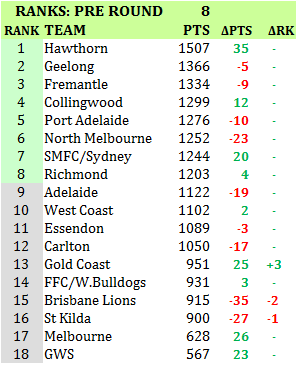 A few of the above games were tipped inside a 2 goal window, but there were a few where we were 5 goals or more off the correct margin.

Only a few changes at the foot of the table, with the Suns rising up to 13th. Brisbane and St Kilda sliding down.

Hawthorn breach 1500 points again, doing so fir the first time since Round 8, 2013 (after defeating GWS).

The Gold Coast Suns are at their highest ranking level (951 points, and almost back to starting position of 1000), as too are the Giants at 567 points.
Posted by The FMI at 20:45