We Are All Diminished

One year ago this past weekend... 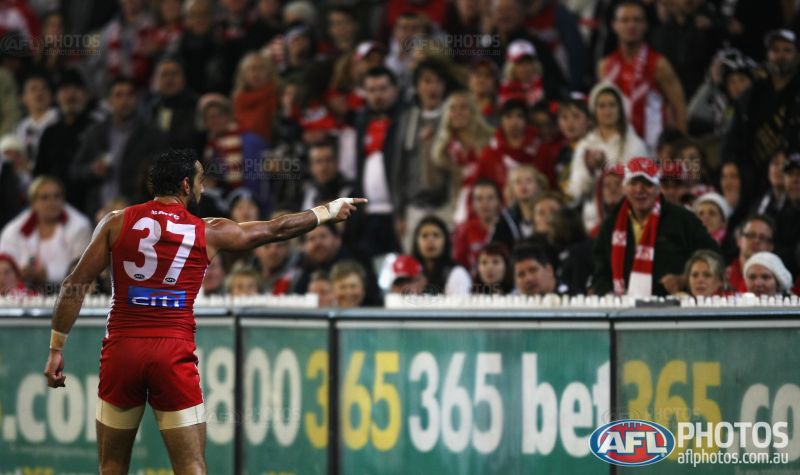 And the AFL is still haunted by racism from the stands.

The events of this week only highlight the gulf between reality and the goal. What needs to be achieved and where we sit today. (PS... the Jake Niall link here is a great read)

Admirable as it is that fans are slowly beginning to self regulate, there still remains a lot to be done. The club has 'gone in hard' with...


"His membership ... terminated and his reapplication for membership will only be considered after he has undertaken a racial vilification education program."

While the member in question wont be readmitted unless completing the education program, we wonder how a club with such a storied recent past of indigenous players and public association with indigenous causes can not have already an educated fan base. Perhaps for some, 10 or more years education is still not enough.

Will the latest Essendon initiative have cut-through as well? We can only hope that every small step, such as this video, leads us eventually to the goal that we as a society need to reach.

And as the cynics that we are here at the Institute, wonder if there are any checks to ensure that banished person doesn't simply join under another name...? We have no recollection of any club asking for any more detail than name, address and credit card number when signing up as a member.
Have Essendon merely given the offender a thrashing with a limp lettuce leaf?


And of course, its not just an Essendon issue. As we have seen last year its also Collingwood's issue, and the Western Bulldogs' issue and the VFL's issue, and an issue for the footballing public of Tasmania.
And on it goes... One wonders what happens at lower levels. Or goes unreported.

And the Bulldogs were dragged back into the issue again, with respected President Peter Gordon* making this video apology and plea.


* We have a lot of time for Peter and support so many of his comments and opinions about football. In this video, he seems both embarrassed and ashamed, as well as stern on the clubs position. Kudos Mr Gordon.
An equally stern blogger provided their own feedback - this via the Scragger Army blog.

A further side note to this issue is that the Western Bulldogs have a Members Code Of Conduct, that states...


3.) We will not engage in nor endorse any form of vilification on the basis of race, colour, gender, religion or sexuality.

It seems as though the Western Bulldogs are the only club to have such an easily reached and documented code on their website. A cursory search of a randomly selected 50% of all the clubs' websites found no other similar document within a sub heading of their main webpage. It either didn't exist or was positioned somewhere in amongst a PDF document around general membership detail. Kind of like the fine print, 'terms-and-conditions' detail that most folk bypass and don't read.

Further, your recent media darlings who espouse that are 'all about the fans' have no principle or value statements around fans' conduct as well (go on, have a look... try and find one!).
But then, as Andrew Demetriou hinted, it might be an agenda driven Association. Most points they raise seem to be about faults with the AFL. Nothing about fans' racism toward players, fighting in the stands or outside grounds, acceptable behavior or abusive language.


But back to racism and the football community's efforts to address it.

Is Mick Malthouse right in suggesting that the AFL is not tough enough on this issue?


"An owner (Donald Sterling) has lost the opportunity to own a team (the LA Clippers basketball franchise) because of a racial comment he made (in a telephone conversation). "He’s been banned for life. What do we do? We slap people on the wrist. I don’t think we’re severe enough or harsh enough in our sport. We worry about ramifications ... we have to toughen up on this."

He is right, no matter if you think it a veiled slight on his former boss or not. We we tend to ban folk until 're-trained', or even softer, let them make an apology because they have a profile and influence.
Fairly tame efforts for a serious issue.

So instead of taking a tough approach, we are instead forced to listed to clowns like the Parrot Jones... what a silly man he is with these ridiculous comments.


No need for us here to pick over the Parrot's comments other than to say they are from a privileged older white male, lost in his own world devoid of life's wonderful diversity.
The Red Bandanna does enough of a job on that bloke to whom diversity is the choice between a French red or some Grange.


"Alan, bring it in tight. If calling a black man a “gorilla” and an “ape” is not racial abuse, what the hell does it take? On previous occasions when black men have been called “black c---ts” by opponents, you’ve also defended that. I repeat, Alan, if that is not racism, what DOES it take?"


The booing of Goodes is lamentable, and the underlying undercurrent of racism still to be fully weeded out. It is one continuing, arduous task for the AFL, and one that Adam Goodes suggests will be a harder and longer road than most in the football world have contemplated to date. But one that most right-thinking in the football community are willing to walk down.


"...more people are standing up and saying "This is unacceptable", which is what we want to start to do. That's how we're going to make change. For me, that's why I see it is going to get worse because people are going to call out more people, which I think needs to happen."


And all of this is just one fire-front that game needs to tackle. Another was highlighted again by another older white male from a privileged background who has yet to move with the times, John Newman. Thankfully this booing from the audience (and latter applause) was with the right intent.

How can the AFL act on changing its stakeholders attitudes around homophobia when it is still mired in addressing racism?
How can this nation go forward, when significant airtime is given to these old timers with 1950's ideals that apply them to a 2010's world?


Russell Jackson at the Guardian, like us, sees hope for the future though.


"Thankfully a growing amount of us wouldn’t let these things occur in our own home and by extension of that, when we go to the footy we want to make it a place where everyone feels equally welcome and safe. That so many fans stood up and told these abusers that what they were doing was wrong and reported them is encouraging. It’s everyone’s responsibility to make sure racism never goes unchecked. Until that happens we’ve got a long way to go."


One year after a nationally televised 'naming and shaming' of an individual in the crowd and we have learnt very little.
But we are on the right track, as proven by the Essendon and Western Bulldogs fans (or the opposition Sydney and Melbourne fans), and those in The Footy Show audience, and those fans that have commented to Adam Goodes.
We have taken many a small step forward down that long road to true understanding.
Posted by The FMI at 09:28