Losses to Richmond, Carlton and West Coast has probably ended their seasons right now. We think they join GWS, St Kilda, the Bulldogs, Melbourne, and Brisbane on the worlds beaches in September.

Which leaves us with the current top 8, and Adelaide and Essendon as contenders.
And even then, slim chances at that for the latter two.

...and we have a blog post coming up, on "who-finishes-where-at-seasons-end" (by our calculations at least) that should come out this week.


RESULTS:
Tipped up another good round again, scoring 7 of the 9 available...

Shocking margin accuracy though... mean error 46 points... second worst of the year after opening round. 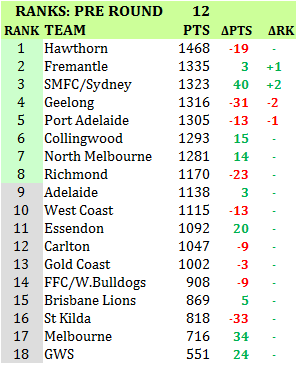 Over to the rankings table...
Mass changes at the top as Sydney and Fremantle climb while Geelong and Port Adelaide fall.
...and Yes, you can win and lose points. If you don't win by the expected margin, then you lose points.

Richmond edge further toward falling from the best 8 (and look certain too in the next few weeks), while Adelaide make fractional ground themselves.

Huge movement from the bottom two teams (Melbourne and GWS), with particular reference to the Demons who are just shy of 100 points off 16th. First time in over 2 years.

Welcome back to some semblance of relevance, Melbourne.