How is it that a club can build and grow under a leadership team into a position to challenge, yet fall away when faced with that challenge?

There have been a few theories around Richmond this year. Caroline Wilson has highlighted some all year.

Richmond a team in turmoil

Because the signs that something is not right at the club came long before the Tigers' listless round-one opening against the Gold Coast. In fact Richmond has not truly looked convincing as a team since – ironically – it defeated Hawthorn in round-19 last year.

What followed apart from some truly mediocre football was the Jake King, Toby Mitchell incident which dragged into summer, a series of Dustin Martin indiscretions culminating in him briefly walking out on the club and some perplexing off-field issues.

President Gary March, having achieved so much, left the club in a huff and almost did not attend the Jack Dyer Medal function. March was angry his man and a board split briefly shadowed the club. Peggy O'Neal was installed in a surprise decision.

Questions also remained regarding the quality of the coaching minds surrounding Hardwick after some departures in 2013 and then early this year came Riewoldt's omission from the leadership group and subsequent dummy spit.

Which leads us to this banner... What motivates someone to prepare that banner?


If you know of anyone linked to this, please let us know.

What is the 'our Richmond' meant to represent?
The former Richmond of 2013, that could win 15 games from 22?
Or is this a longing for a Richmond of old, triggered by the passing of Tom Hafey? Are they looking for a more simpler direct football from the Tigers?

Or is it as highlighted by Dugald Jellie, a longing for a more inclusive and open football club, of and for the football supporters of Rchmond?
Has the club become insular. A place for the like minded, communicating with group-think; where counterpoints are excluded?
And where control over a personal empire precludes involvement from others outside the fortress walls?

Dugald has marked this years TigerTigerBurningBright blog with two such pieces that allude to the insular Richmond.
Firstly, a structural and physical exclusion as mentioned here (and further in the link).


R3 v Western Bulldogs: A lament, for us Tigers

In all my time visiting Punt Road these past two seasons, never have I felt as welcome as I was at Whitten Oval on Saturday morning. Partly, it’s because of the design of the stadiums. Whitten Oval’s redevelopment invites people into an open foyer, from which they can freely access the playing arena, a large reception area, a bar, a shop, and numerous other facilities. It invites curiosity. It feels open to all.

At Punt Road, the most obvious entry-point is into the Superstore. There’s a mouse-hole entrance – manned usually by security – to the social rooms. And there’s a separate entrance to the club offices. It feels like the architecture of exclusion. There is no space where visitors feel as though they can freely walk-in and assemble.


And secondly, the personal exclusion of people with good intent, prepared to give of themselves to share the love of club and football. An exclusion based around control of ones own area of influence, regardless of the potential benefits outside of their own influence circle.

Dugald writes more about it here, and the selected text sets the tone...


A lament for Richmond (& how the club broke my heart)

... I introduced myself to a players’ partner at a game, and asked whether I could sit beside her at a game and write about it from her perspective. She seemed receptive to the idea. She gave me her business card. I said I’d be in contact.

Two days later, on a Monday morning, I received a terse phone call... 'if ever I wanted access to anyone at the club I need put it in writing.'

... I wrote a 609-word request asking for access. The reply was five words: “XXXX is unavailable for interview”.


While the above banner may have been a simple plea for a return to the Richmond of 2013, a small part of the FootyMaths Institute would hope its for the return of the 'Our Richmond' ...as the community club it once was. Inclusive, embracing, welcoming.


RESULTS:
Are you still following our tips?
Are you all happy with a solid 8 from 9 this week?

What a pity Footscray didn't turn up for the win and give us a 9-bagger!

Still - for the first time this year, we breach the +70% correct tip rate. Yep, its not a great figure, and it had taken a long time to get there, but we still out-perform a few other mathematical predictors for tipping and margin accuracy... which isnt too bad. 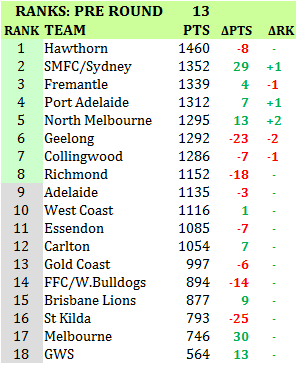 All the changes come at the top of the table as Sydney become our second best ranked team replacing Fremantle, and Port Adelaide and North Melbourne both rise a well.

At the bottom half, there was minimal change from 9th to 15th with only the Bulldogs faring the worst from that group.

Melbourne make more ground on St Kilda, who again dropped heavily, and now sit 37 points adrift of 16th. Another set of results like this week and St Kilda will swap with Melbourne.
Posted by The FMI at 22:32