"For a further update on the AFL, we now cross live to CNN Centre in Atlanta and Wolf Blitzer in "The Situation Room"..."

"Thank you Anderson Cooper... I'm Wolf Blitzer, and your in "The Situation Room"."

"Tonight on The Situation Room, the ever evolving AFL landscape that is the drugs in sport affair."

"Every day and every hour the landscape is changing... and one thing is for sure, this war is set to rage on and CNN will deliver full coverage until it hurts... YOU, not us."

"As the situation stands now, we have ASADA forces striking into the Essendon camp with Show Cause notices issued, and sporadic fighting around Reduced Penalties for Loyalists provided they support the ASADA offensive."

"The Dons' loyalist forces are already fractured into two camps


- Team Hird - lead by the exiled Prince, and
- the rusted-on followers of the the old guard, now under the control of General Little, who usurped the reign of former democratically elected 'Evans parliament'.

"The recent ASADA incursions have given stronger voice and body to the 'Enough Essendon'! faction, who are calling for the club to admit its mistakes and take immediate action to end the crisis that has split the nations-state"

"This recent ASADA push has also been joined by its 'coalition of the willing', led by...


- The Victorian WorkCover Authority, who have launched their own investigation into the drugs affair,
- The Victorian Police who arrested (before release without charge) a key supplier of chemicals to the Hird regime, and
- a quickly forming alliance of 17 other nation-states that are looking for stability in the AFL region, with the aim to regain the trust and support of their people and benefactors before they flee the AFL lands toward Soccer and rugby codes"

"And while these battles rage on, there are special forces actions around the source of most of the chemicals supplied to the club, with a joint Vic Police / Medicare Authority investigation into possible fraud by Mr Dank. CNN have not been able to pinpoint the excat location of the elusive Mr Dank, but believes he is embedded deep within the Hird and Little camps"

"What CNN can confirm is that there will be further unrest at Essendon, with a possible push to retake the Tullamarine headquarters by the 'Enough' militia."

"We are also hearing reports that the exiled Prince Hird may never return to his seat at Tullamarine, as both the Enough militia is building strength and the ASADA forces press harder. CNN also expects the UN (AFL) to step in and further banish the boy Prince sometime in the near future"


"I'm Wolf Blitzer, and that's 'The Situation' as of today.

"Now over to Jeannie Moos to be casually culturally insensitive and racist".

Yes the above is mostly us having a laugh, so please lawyers - take it with the good spirit it as was intended.

Also... Disclosure!!!
Read this wonderfully wistful piece about Richmond and Richo by Dugald Jellie.
[Someone get this man a book deal, pronto!]
Buried away in there is the note that the FMI is run by a Richmond fan... which is true, but never previously disclosed here.
And it in no way colours the discourse here - we are hard on all teams as required.


RESULTS:
OK... enough fun.
We need to not be so happy with ourselves too, it seems...

...because after that we tipped 1 correct from the last 5.

The upsets certainly made their mark on tipping, and also created a few shuffles in the rankings table. 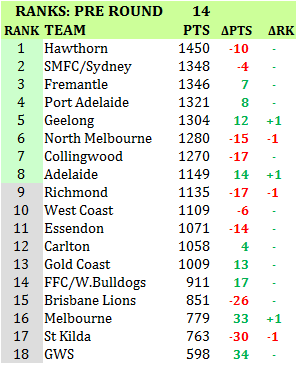 Welcome to 16th Melbourne... Finally away from the depths of the cellar.

Farewell from the top 8 Richmond... your time is up. A return to 11th place and obscurity awaits.

Geelong also rise at the expense of that roller-coaster we call North Melbourne.