Tale Of This Season - R.11 Edition

Way back at the start of the season, we worked our tables and spreadsheets through Ol' Bessie to determine who would finish where at seasons end, by applying our ranking numbers to the draw, and making predictive attempts at results.
Season 2014 was replicated over and over, and the aggregate results were listed in a blog post series titled 2014 Rate Expectations.

At that time, who would have thought that Port Adelaide would be topping the table now, and the stone like flight of the Tigers 2014 season? There were not many tipping those teams trajectories. Accordingly, the pre-season predictions look quite poor on reflection.

But with 11 games of the 2014 Season tucked away in our collective back pockets, we take this post-bye chance to refresh the predictions a touch more accurately.


After running the simulations of the season, we look at two forms of results. The charts below are produced from the accumulated ladders after each simulated seasons, and also the number of wins per team per season.


Ladder Positions
Looking at the accumulated ladder positions, we can suggest the following end of season possibilities.

Our calculations currently have Hawthorn and Port Adelaide in a very tight race for the minor Premiership. Along with Sydney, they make up the top three on the ladder in 3 of out 4 times we run our scenarios.

Of the remaining 5 places in the final 8,we see Fremantle, Collingwood, Geelong and North Melbourne filling slots 4th through to 7th, with the last double-chance spot at this time most likely to belong to Fremantle.

Rounding out the 8, and turning up in 8th in 60% or our scenarios, the Gold Coast Suns.
In tabular form, this is the percentage chance we see of teams finishing at seasons end. 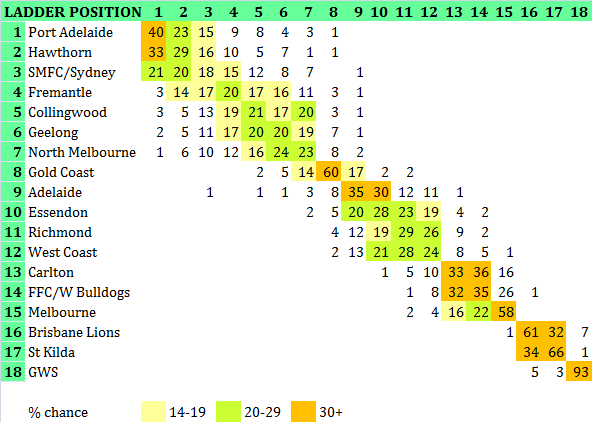 The top 8 looks very set at the minute, with only Adelaide having a 12% chance of finals football. And in 0.5% (listed as 1% above) of our scenarios, Adelaide could finish third. Possible, but unlikely.
After Adelaide the only other teams with a sniff of finals football are Essendon (6% chance), Richmond (4%), and West Coast (2%). As per this weeks rankings results blog, you can pretty much put a line through the Eagles and Richmond for finals footy.

At the foot of the table, we have the GWS almost assured of last, with Brisbane and St Kilda in 16th and 17th.

Graphically, the chart of average ladder positions looks like this below.
It appears in this data that there is a few levels of teams this year. The top tier from 1st to 7th, a mid tier from 9th down to 12th, and a pair of tiers at the foot of the table.
The Gold Coast appears to be bridging between the mid tier and the top tier, and the teams in 13th to 15th are either reaching for the mid tier, or more worryingly drifting down to the very bottom tier. 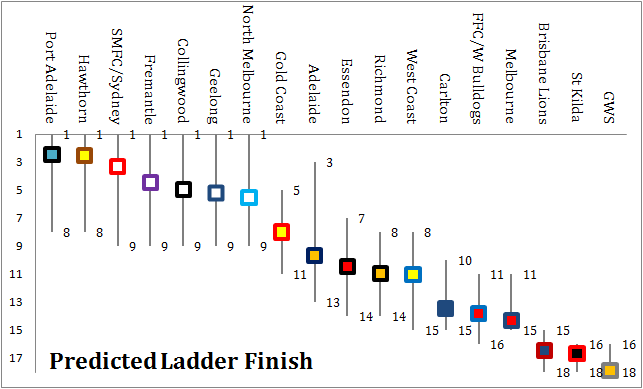 As in the prelude, who would have predicted Port for such loft heights, and countr to that, Richmond to miss the finals so badly.


Its All About Wins
Winning is everything they say (huh!?!), so under this approach, lets use the numbers of wins from the season simulations above to plot out our 2014 ladder prediction.

Firstly, in the table below, the ◊ mark indicates the number of wins currently for each team (excluding St Kilda, Brisbane and the GWS, who have bolded text).

As before, before, the battle for top spot again is between Port Adelaide and Hawthorn, with Port likely to win somewhere between a minimum of 4 more games, and all that remain. This is also true for Hawthorn, but the minimum is 6 more.

Further to the above commentary about there being tiers of teams in 2014, this chart also highlights that quite well.
Looking at the highlighted numbers below, there is a strong representation from the top 7 teams in the 15 to 18 win bracket.

The next large bracket is those teams from 9 through to 12, where we predict an 8 to 11 game wining season. Again, the Gold Coast Suns are expected to bridge the gap between those two tiers. 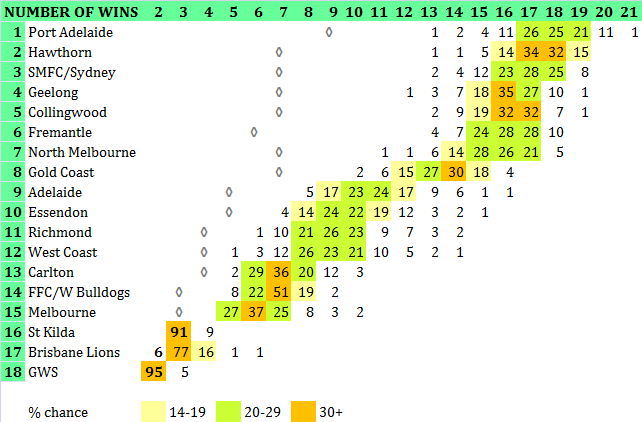 There is of course a clutch of teams that wont appear to win more than 4 games at the foot of the chart, and just above them is a block of three teams we expect to score anywhere between 5 and 8 wins. This block of Melbourne, the Bulldogs and Carlton appears to be clearly 'hanging on' to the pack that will miss the 8 by a few games, and is distinct and separate from the last three teams.

Charting these using average wins/season (with outlier markers), the predicted ladder looks as below. This again shows the splitting of the comp into sectors of teams that will win around the window of 15 to 17 games, with another set in the 6 to 11 game bracket and a smaller set with only 2 or 3 wins... based on our estimations.
Posted by The FMI at 16:25