Tale Of This Season - R.13 Edition

Once again, all the seasons results are fed into our tables and spreadsheets through Ol' Bessie to determine who would finish where at seasons end, by applying our ranking numbers to the draw, and making predictive attempts at results.


After running the simulations of the season, we look at two forms of results. The charts below are produced from the accumulated ladders after each simulated seasons, and also the number of wins per team per season.


Ladder Positions
Looking at the accumulated ladder positions, we can suggest the following end of season possibilities.

With a great run home, we now position Sydney as the most likely to finish minor Premiers... The Swans play only two of the top 8 (Port and Hawthorn) in the next 10 games.
They just edge Port Adelaide, who have a tougher load, but are a game ahead. Port play 4 f the top 8, Fremantle, Gold Coast, Sydney and Collingwood.
Hawthorn are picked for third, with 7 games of the next 10 against top 8 opponents.

As per the post-Round 11 iteration of our predictions, the remaining 5 places in the 8, are spread between Fremantle, Collingwood, Geelong and North Melbourne.
The Suns remain +50% likely to finish 8th, with Adelaide strengthening its bid for 8th after defeating North Melbourne.

In tabular form, this is the percentage chance we see of teams finishing at seasons end. 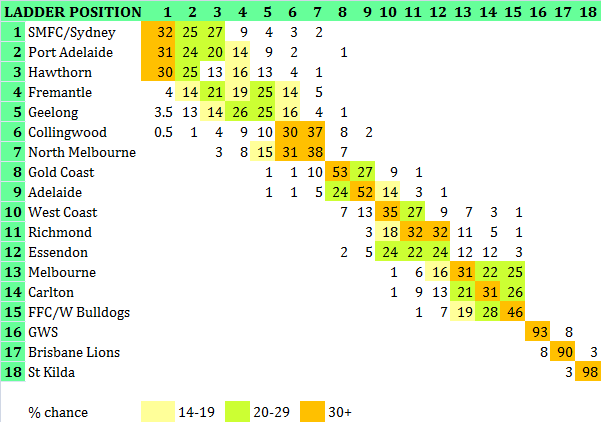 The top 8 looks very set at the minute, but that Adelaide win boosts them from a 12% chance of finals football up to a 31% chance.
West Coast nail-biter win over the Suns lifts their finals chances from an extremely remote 2% up to a very remote 7% chance. Essendon still hold a 2% chance, while all other teams are done for September fun.


At the foot of the table, we have the GWS almost assured of last... wait what!! Oh yes a win over Brisbane sees them edge away from last. The Lions and Saints in 16th and 17th.


Graphically, the chart of average ladder positions looks like this below. 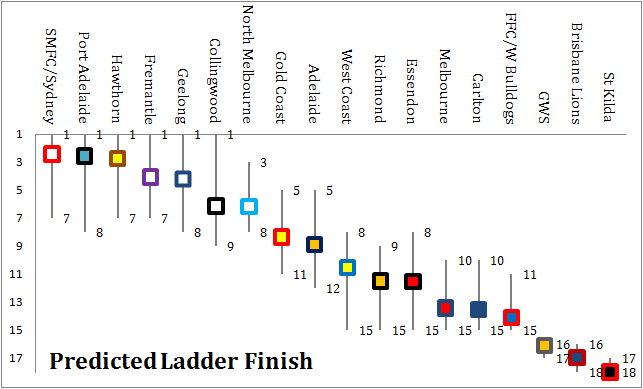 Its All About Wins
Using the number of wins per team, we get a slightly different 2014 ladder prediction.

[In the table below, the ◊ mark indicates the number of wins currently for each team (excluding Essendon, St Kilda, Brisbane and the GWS, who have bolded text).

Under this methodology, we put Port Adelaide ahead, just, over Sydney for minor Premiers.
Looking at the orange highlighted numbers below, we see Hawthorn join the top two as most likely to have 18 wins.
Following them is Geelong and Fremantle both around 16 -17 wins. 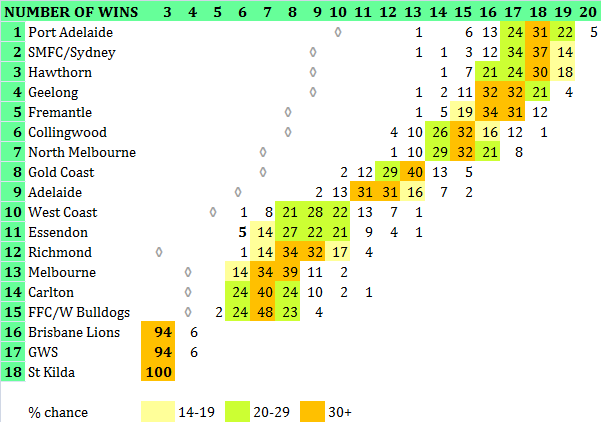 Interestingly, we see St Kilda as not able to win another game for the year... in all runs of our forecasts. The Saints play 4 top 8 sides in the next 10, which suggests there is a chance the predictor is wrong.

Brisbane and the GWS also have only a 6% chance to win again. Brisbane play 6 top 8 teams, while the GWS play 5, including Sydney.

Also rather oddly is the 5% chance that Essendon won't win again. 5 of the next 10 are against top 8 sides, and the other 5 are against sides immediately below them.

Charting these using average wins/season (with outlier markers), the predicted ladder looks as below. 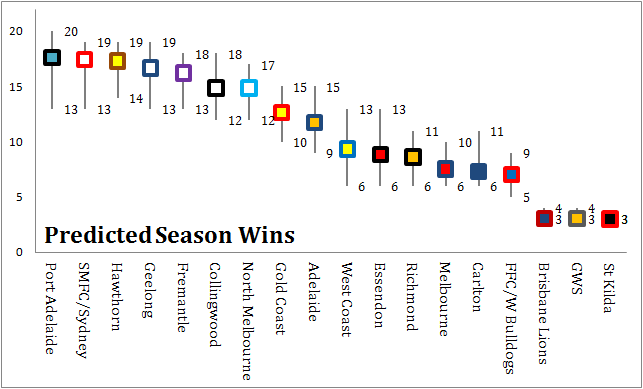 This again shows the splitting of the comp into sectors of teams that will win around the window of 15 to 17 games, with another set in the 6 to 10 game bracket and a smaller set with only 3 or 4 wins... based on our estimations.
Posted by The FMI at 22:17