It seems very apparent to the FootyMaths Institute staff that the prime motive of Essendon officialdom is to do what ever it takes (hmmmm...) to absolve all and sundry associated with the all-but criminal practices uncovered by the Australian Crime Commission, then latterly investigated by ASADA and other investigative journalists (you know, these guys, not this guy).

And the recent "lets bin the processes legality" argle-bargle, combined with the "Dr Harcourt was talking out of school" fooforaw and the "who really called MMM" mumbo-jumbo only further highlighted the deflection tactics employed. Its all about tearing down reputations (of bodies, agencies, or people) while ignoring the key point of the whole affair.

So it was interesting to read reminders of what the real issue has been about, and will always be about... the poor treatment of young men by its employer.
A failed duty of care.
A breach of employer obligations under the Occupational Health and Safety Act.
A derailing of an existing medical supervisory process.
The administering of a variety of medication intended for persons suffering various heath conditions, to healthy men and developing bodies.
Without certainty of outcome, and lax to non-existent documentation.

Caroline Wilson, again, as sharp as ever...

Essendon continues to duck for cover

"Thompson’s comments begged the question: Why were the Bombers given anti-carcinogenic drugs? Why for that matter were they given anti-obesity drugs? Why on earth were they given a drug used for the treatment of muscular dystrophy? Why is the club trying to stall ASADA’s investigation when the players and their families deserve answers, not avoidance?"

There is a whole lot more in that article, and the one below, that cuts to the nub of the issue. Click the headlines to read on.

While a shade less powerful, Damian Barrett followed up today as well...

Forget the sideshow, the story is about the Essendon players

"It is about a group of men, some of them teenagers, whose blind faith in those in charge at Essendon Football Club saw them administered drugs their bodies didn't need, all in the self-proclaimed whatever-it-takes pursuit of success.

Absorb, for a moment, what Thompson said. Essendon players, none of whom had been diagnosed with cancer, were given a drug to treat cancer. Confirmed.

...  The full truth, that commodity Hird was initially so desperate to discover, and the one which was supposedly going to put him and everyone at Essendon in a far better place, will never be revealed."

And that last Barrett line is the saddest part of all... that the truth may never be revealed.

All in Australian football all tainted by the current goings on. We will remain so tainted forevermore unless the truth is revealed as to what these young men were asked to do, knowingly or otherwise.

The reality and gravity of the situation, the experimentation, must be in the focus of the Australian football community. And the issue resolved to its utmost.
And deflectors and detractors must not be given oxygen.

Only then, the taint can begin to be cleansed from football.

(And for writing all that, I wont be answering any knocks on the Institute front door for a while.)

Not a great weekends tipping this weekend past. Only 6 of the 9 tipped correct and only 2 of those tips inside a 2 goal accuracy window. 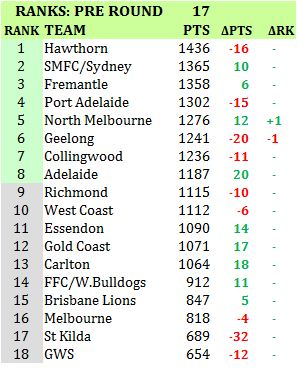 North Melbourne defeating the Hawks against the tip, and Geelong not doing so well against the Bulldogs, sees both teams change in 5th and 6th.
The Hawks also further come back to the pack.

Adelaide crushing the GWS gives them a boost, which would also have been driven by their derby result last week.

Positions 9 through to 12 look set for re-orderin action as only 44 points separate 4 teams, and the Suns look set to do the most movement.
All that comes with the usual "provided they keep going sans-G.Ablett" caveat.

St Kilda slide further in overall rankings points and are now only 35 points off bottom. No team other than GWS has been bottom since the Giants inception. This looks set to change in the next week or two.

We may not change ranking leader this season, but it appears almost certain to change our ranking spooner.
Posted by The FMI at 08:01