In the tips for Round 19 blog post, there was the following notation...


Worth noting the 'Melbourne by 8' tip includes a home ground advantage bonus. This was applied because they play an interstate team. Without that bonus, its Brisbane by 5... why no bonus you ask? Well, it is at the Docklands. Not a preferred 'home' ground for Melbourne.


This was added at the last minute as we noted that in our original tip calculations, we tipped Brisbane by 5 points. Looking at that weekends tips, it was the only away team predicted to win.
We looked again at the matchup and thought "why are we NOT giving Melbourne a home advantage vs an interstate team"?

So, in a last minute change, we adjusted Melbourne to have a home ground advantage, and that shifted the tip to Melbourne, and not to Brisbane.

But our rule is that MCG teams that play less than 4 games at Docklands don't get a home ground advantage - even against interstate teams.

And this is the rule we played all year, and also in our Monash University tipping selections (which are of course entered before the weekend starts).

We broke our own rule, purely to get all nine games as home tips... to suit a headline.

We have to offer our apologies for stuffing about, and affecting your tips.

Fixing the silly error above sees us return to 7 from 9 over the weekend.

Also some nice margin tipping in the last two games, with both predicted inside 2 points.
Certainly helped the MAPE this round. 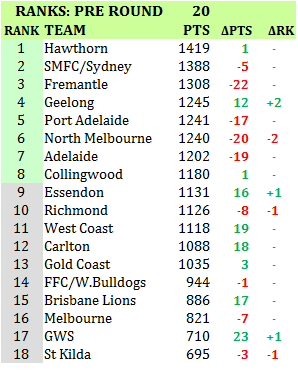 Over to the standings and we have a change of significance!!!
GWS are no longer our worst ranked team, with St Kilda now taking that (less than coveted) position.
GWS now hunting Melbourne for 16th spot.

This brings us into like with Troy Wheatley's Power Rankings and the rankings at Footy Forecaster.
(PS... we lead Footy Forecaster by 3 tips, and just shade them on MAPE... not bragging, just comparing.)

Also, Geelong bounce back into our top 4 with North Melbourne falling to 6th. That said, the points differences make those in positions 4, 5 and 6 all about even.

Essendon also overtake Richmond for 9th. Yes this might seem a bit odd, but Richmond didn't win by the expected margin over GWS so cop a penalty, while Essendon did better than expected (i.e. didn't lose by the predicted) so therefore gain.
Posted by The FMI at 09:35