Not only did we stuff up a round 19 tip but changing our tip rule, but we have now stuffed you around again by releasing our tips SO LATE on the Friday afternoon.

And what a bad week to leave the tip blog posting so late, as we had a great week on the tip.


RESULTS:
So the weekend looked like a train-wreck tipping wise as we missed the Tigers tip.
But then a little 8-correct stretch cleaned up the weekend nicely, even getting close with the Cats (off by 4) and Dogs (off by 2) to boot. A nice return on the Monash Uni score of 102 - second-best haul of the year. 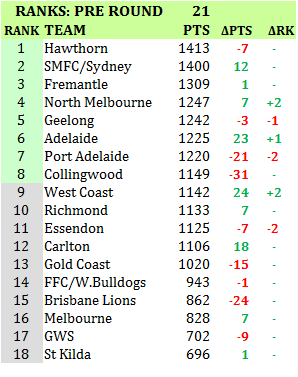 Interesting changes in the table this week.

North Melbourne with the easy win over GWS shoot to 4th, displacing Geelong who didn't do as expected over Fremantle.

At the same time, Port Adelaide's ongoing meltdown sees them slip 2 spots to 7th, and allows their arch rivals from the other end of Port Rd to leap into 6th!

And only 22 points separates the lot of them... more changes ahead!

Also interesting, Richmond defeated Essendon to overtake the Dons, but West Coast demolishing Collingwood has them leap-frogging both into 9th, and creates another bloc of teams separated by only 43 points (8th to 12th).


And speaking of Collingwood - lets just put this out there...
With a ranking points total of 1149, they are now a rock solid, middle of the road football club, bound for week-in, week-out drudgery.